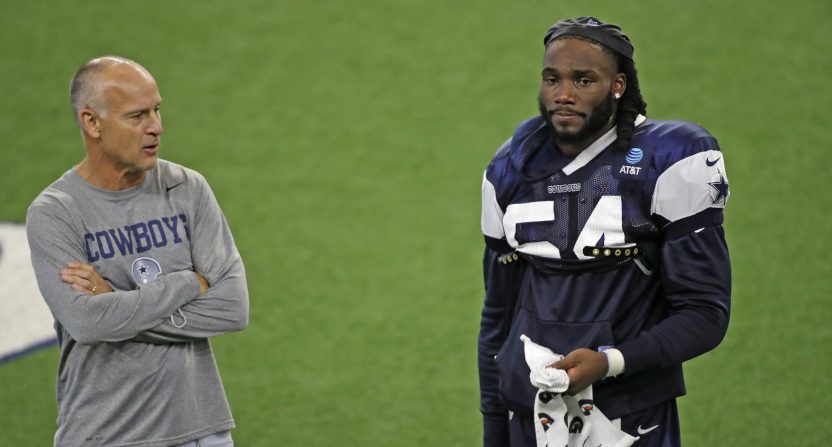 Getting hot pepper juice (or, more accurately, the active component capsaicin) in your eyes is extremely painful, and it’s certainly led to a lot of people having to take breaks from cooking or even lab experiments to go wash their eyes out. But it’s stranger to see that happen on a NFL coach’s call with reporters. That’s what happened during a conference call Dallas Cowboys defensive coordinator Mike Nolan (seen above left with linebacker Jaylon Smith at training camp in August) held with media Monday, though:

Conference call with Cowboys defensive coordinator Mike Nolan has been put on hold because he had Tabasco sauce on his finger and it got in his eye.
Can't make this stuff up..
damn

Shortly after Tabasco on Mike Nolan's finger got in his eye, Cowboys DC explained 52-yard TD Trevon Diggs was burned on.

"His eyes got him in trouble," Nolan said. "If you don’t have good eyes, you can get in trouble in this game real quick no matter what position you play." https://t.co/VHL9Ns9Pt6

So it sounds like Nolan was able to deal with this relatively quickly without much damage. That’s fortunate, but that’s something that can’t be said about his defense this season. The Cowboys are 2-5 and have allowed 34.7 points per game, the worst number in the league. They’ve also allowed 408.1 yards per game, sixth-worst.

And while Dallas’ struggles aren’t all about the defense (Dak Prescott’s injury was certainly not “a blessing in disguise,” no matter how Tony Dungy tried to spin it, and the Cowboys” 25.1 points per game are 19th in the league), Nolan’s defense has been under plenty of fire. So it’s certainly funny at least to see him bringing a different kind of fire on himself.