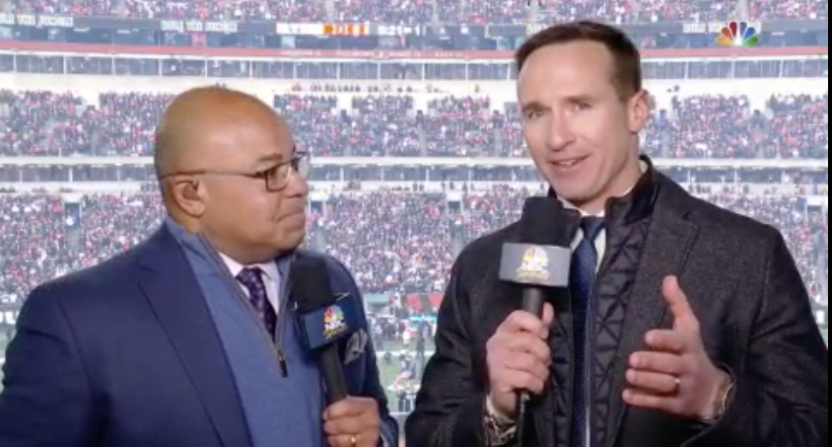 Drew Brees had the chance to showcase himself to the nation as an NFL broadcaster on Sunday, working as an analyst during NBC’s broadcast of the Las Vegas Raiders–Cincinnati Bengals playoff game.

It did not go well.

Brees got crushed by media critics and viewers alike, who called him “beyond vanilla,” “corporate,” “not ready for the playoff stage,” and sounding as though he had “nothing to say.”

In particular, a moment in which a whistle was heard during a touchdown pass, potentially impacting the outcome, should have been a prime display of Brees’ command of the rules and situation. Instead, he seemingly ignored this crucial moment for ten minutes before giving a tepid comment in passing.

NBC just now discussing ten minutes later. Brees says that he had heard the whistle which is weird as it went unaddressed until now. Booth in agreement play should have been replayed for an inadvertent whistle.

As Sports Media podcaster Richard Dietsch noted in his most recent episode, the sentiment was that “the game felt too big for where he is in his broadcast development.” Given all the hype that followed Brees into the booth and the inevitable comparisons to Tony Romo, expectations were sky-high for the former Saints quarterback to jump in and immediately have full command of the job.

Dietsch’s guest this week, Mike Golic, knows a thing or two about transitioning from a career as an NFL player to an NFL talking head, not to mention what it takes to work in a football booth for a major network. The former Mike & Mike host shared his thoughts on the reaction to Brees by explaining how the sports broadcasting world that Drew walked into is vastly different, and harsher, than the one that worked so well for him and many of his colleagues.

Guest is @golic. On life after ESPN; how he approached getting work following ESPN; calling college and pro football this year and more.

Some news: Golic says he would be interested in returning to daily sports-talk radio.https://t.co/wHKtSxjtjS

“The one thing that benefitted Greeny and I, in all honesty, when we started in 2000, is nobody was listening to us,” said Golic. “For people who don’t remember, when the morning show started at ESPN…we were in one market, that was Chicago. We weren’t cleared everywhere, but then we started gaining more and more affiliates. We weren’t even carried in Hartford…so our [ESPN] bosses couldn’t even hear us.

“We’d go through the first year or two, and we made mistakes and we kinda found our way. So if it was Mike & Mike just starting today, we would get instant feedback. Probably very critical feedback because I had never done it before, Greeny had never done it before, and they threw us together, and we had time to work through all our mistakes and get through things. You don’t get that today.

“That’s why I said, the new show with Keyshawn, J-Will, and Max, they were thrown on hundreds of affiliates, didn’t get a ton of time to practice together, and then had instant feedback on it anyway because it’s a social media world. God, I wish it wouldn’t happen to people. I wish it wouldn’t happen to them. But that’s the reality today when you put a show together. You’re gonna get instant feedback.

“So, now, take it into the booth. So with analysts, we know what what’s gonna happen and sometimes companies sit there and try to say ‘well, we’re not taking people because of their names.’ That’s bull. They do. They take the stars. I get it. I understand it. I understand that they do that. So what happened? You know what happened is Tony Romo came right off the field, went right in the booth, and what was he? Instant, right? I mean, oh my god, he’s calling plays, he’s having a ball, what a personality. So, the thought process is, bring in these guys right off the field and, look, Romo was able to do it, so that’s what they’re trying to recreate… It’s tough, man.

When Drew started doing the Notre Dame games, people would tweet at me, ‘what do you think?’ I said listen, I’m not judging a guy when he just starts. He’s a walk-in Hall of Famer. But he’s now in a different world of learning timing and everything that goes with a TV broadcast, which he’ll learn. He’ll learn in time…your first and then your hundredth is a different person. But unfortunately, you get judged early and then you get tagged with that. ‘You’re supposed to be great at this.’ Man, that’s unfair but, you know what, unfair or fair, that doesn’t come into play. You’re gonna get that opportunity and you’re gonna be judged immediately on it.”

Deitsch noted that people may forget that Troy Aikman didn’t just jump into the No. 1 analyst spot for Fox. He started out on lesser broadcasts before working his way up. Not to mention, Romo is a “unicorn” and shouldn’t be considered as the model by which networks measure all former players turned analysts.

Golic said that the situation now is akin to that of an NFL owner who drafts a star rookie quarterback and expects them to play immediately.

Deitsch also reiterated that “this is where the finances come in,” noting that NBC is paying Brees way too much money not to throw him out there during their playoffs broadcast, for better or worse.

NBC has one game in this weekend’s Divisional Round, a Sunday afternoon showdown between the Los Angeles Rams and Tampa Bay Buccaneers. To no one’s surprise, it will be Al Michaels and Cris Collinsworth in the booth, so no chance at redemption for Brees just yet.