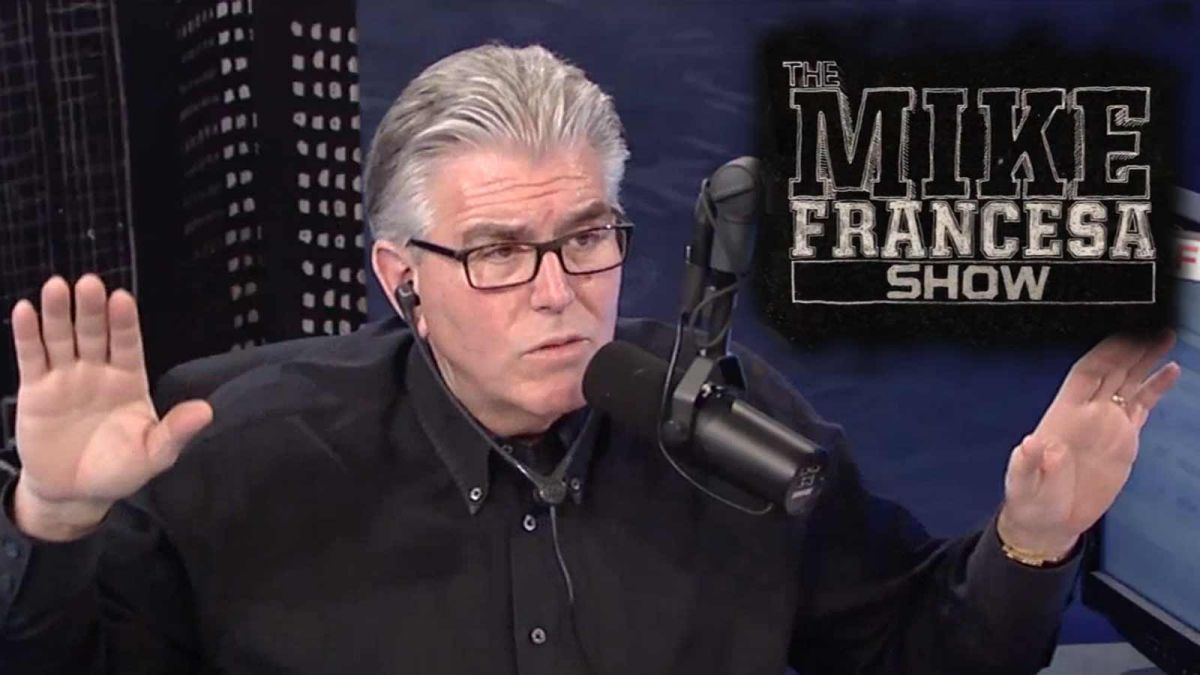 Plenty of people criticized Odell Beckham Jr. for his performance (four catches for 28 yards, three drops) in the New York Giants’ playoff loss to Green Bay Sunday, with many bringing up the boat party he and other teammates attended in Miami on an off-day. WFAN host Mike Francesa took it to a whole different level Monday, though, going “I’m not going to revisit the boat” and then proceeding to get mad about everything else about Beckham, including his propensity for ridiculously difficult one-handed catches. Here’s the segment (starting at 1:30 after a minute-long oil change ad and Francesa’s delightful 30-second intro song, but his ranting about Beckham really starts about 4:45 or so):

Here’s a transcription of the key part, which starts at 5:30:

“If we’re going to treat Beckham, and people already treat him, like he’s a superstar of enormous proportion, you can’t have the kind of drops that he has way too often and had yesterday in the biggest game he’s ever played! You can’t have any of those plays, no less all of them! The Beckham ball that stopped the drive’s gotta be caught! The Beckham ball in the end zone’s gotta be caught! The [Sterling] Shepard ball in the end zone has to be caught in those games, if you want to win the ball game!”

After a digression on how “the punter was awful, the return team was terrible, …everything came apart yesterday” and so on, plus a rant about the Giants using Bobby Rainey on a third-and-one, criticism of the secondary’s defense on the Hail Mary that comes with an interesting interpretation of NFL rules (“there are no fouls on that play!”),  and a whole lot more detailed ranting about the Giants’ various shortcomings, Francesa returns to Beckham at 13:50:

“Let me say this about Beckham. At what point—and he’s got more apologists in the media than just about anybody in the media—and I understand how gifted he is, I understand, but when does he start to get criticized—except for a few places—for the drops that are so consistent and way too frequent for a player of that magnitude? He had more drops yesterday than he should have in a year. He had more drops yesterday than some great receivers have in a lifetime. He has to raise his game yesterday, not lower his game, and he lowered his game to depths that were way below sea level yesterday.”

Francesa then talks about how he won’t revisit Beckham’s boat trip, but he’s mad about everything else.

“I don’t care where he went during the week. I’m not going to revisit the boat because it’s just part of the immaturity that has him out on the field with no shirt on before the game, like he’s proving some point to somebody. Nobody cares if he wears sleeves. Catch the ball. Nobody cares if he’s out there with no shirt on. Catch the ball. Nobody cares that you can make one-handed catches. Try making two-handed catches! Catch the ball. Grow up. And maybe somewhere out there, an owner, a general manager, a coach will maybe force this guy to grow up before they look back and say ‘You know, he never really was as good as we thought he was going to be.'”

He then drops a Jeremy Shockey reference and moves on to blasting Beckham’s celebrity status and his one-handed catches.

“All the things, the celebrity, the one-hand catch, listen, he has been given stuff that you only used to get from winning, and that’s the system upside down. Now you become a star by basically outrageous behavior and doing stuff like making a one-handed catch when basically you dropped every fourth ball. I’d rather have a guy who doesn’t make one-handed catches but doesn’t ever have a problem making two-handed catches.”

Fundamentals, playing the game the right way, avoiding celebrity status, catching the ball with both hands and wearing shirts are apparently key to NFL success in Mike Francesa’s world. There’s a lot of ridiculous stuff in here, especially “more drops yesterday than some great receivers have in a lifetime”; it would be quite something to see a great receiver with four or less career drops. Drops happen, and Beckham unquestionably had a bad day, but targeting him this way and going after him for his celebrity status and the great catches he’s previously made feels unfair. That’s just another day on the radio for Francesa, though. Perhaps we should ask him if this latest round of Beckham-bashing is a new report or an old report.