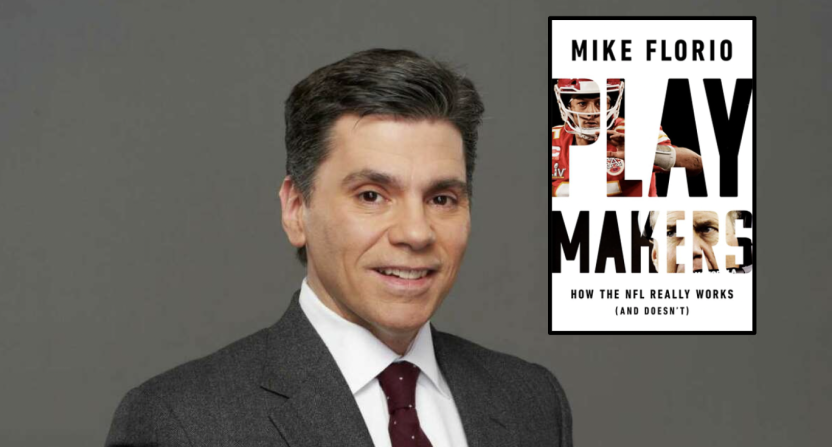 Few people understand the inner workings of the NFL better than Mike Florio. The former lawyer is the creator and founder of Pro Football Talk, arguably the top NFL news website. He hosts PFT Live on Peacock and appears on NBC’s Sunday Night Football.

Florio has now come out with his first book, Playmakers: How the NFL Really Works (And Doesn’t). And yes, the title is a reference to the former ESPN football drama Playmakers that the league essentially killed for being a “gross mischaracterization” of their brand.

Awful Announcing caught up with Florio to discuss the book, his website, and the NFL.

Why did you write Playmakers?

“A couple of years ago I had people tell me ‘You seem to know a lot about the NFL, you should write a book.’ My response was: ‘I write about the NFL every day. The last thing I want to do when I’m not writing on the platform I’ve spent 20 years building is write a book about the NFL.’ I just didn’t want to do it.

“Eventually, I had enough people say ‘you should do it’ that I decided that the only way to get them to quit telling me I should do it, is to just do it. That was the impetus. I wish I had a better story.”

What do fans not get about the NFL?

“One of the biggest realizations that fans resist is that football fundamentally is a business. Sometimes those business considerations get in the way of what’s best for the game. What we try to do at PFT and in Playmakers is to help people understand where business sometimes takes precedence over the game.

Can you give an example of the NFL listening to the fans or media?

“The decision by the NFL to change the overtime rules for the postseason. From a business standpoint, I don’t know if that’s a good thing. Who does that really help? Does that result in more people watching games? Does it generate a single penny?… There was no clear business impetus for the league to do this. This is one of those situations where the league listened to the stakeholders on the outside—the fans and the media—and did something that was in the best interest of the game.”

How do you go from practicing law to writing about the NFL?

“When you practice law, you generate a lot of paperwork. You write a lot of things whether it’s letters or briefs. And like, three people ever read it. Wouldn’t it be nice to write something that more people actually read? I’ve always been a fan of the NFL, dating back to the Immaculate Reception game in December 1972.”

When you started in 2001, what made you think that this could be a success?

“The internet is the great equalizer. You can be anywhere. You can work multiple jobs if you’re willing to spend your free time doing something else that for multiple years generates very little revenue but you like doing it so you keep on doing it. One day at a time. One post at a time. One week at a time you gradually build an audience.”

What was the breakthrough moment?

“2006 is when it all changed. That was the year we partnered with Sprint as our first major sponsor. That’s when I knew. No.1, it’s going to keep getting bigger and bigger. No.2, at some point I’m not going to be practicing law, I’m going to be doing this full time. It was three years later that we ended up partnering with NBC.”

Have you gotten many complaints from the league about your opinions?

Is there a memorable conflict you’ve had with the NFL?

“The Colin Kaepernick workout that the league was trying to engineer in November 2019. It fell apart because of a dispute over the language of a release they wanted him to sign. Ostensibly the release of any liabilities for any injuries he would suffer while he was engaging in the workout. But there was a concern that the language went so broadly that if he had lingering legal claims against the league, and he did, he would sign them away.

“The two sides got into a back and forth and the whole thing fell apart. I was expressing some pretty strong opinions about that. The league office didn’t like it, but they didn’t say anything (at first) They let it fester. It eventually erupted on a Friday afternoon. The next thing I knew I was on a conference call trying to help everyone understand.

“Fundamentally, the best way to deal with something you see on my website that you don’t like is to get in touch with me the moment you see it. Let me know your side of it before I lock into an opinion that I articulate over and over again. That ended up being a very useful conversation although the day it happened, it didn’t feel very useful to me at all.”

“This happened in 2016. Dirk Koetter had just gotten the job as the Tampa Bay coach. There was a theory around the league that the Buccaneers pushed out Lovie Smith to elevate Dirk Koetter who was the offensive guru who was working with Jameis Winston. There was talk that another team was going to try and hire Koetter to be its head coach. They would have lost him.

“I interviewed Koetter after he got the job on PFT Live. I asked him ‘What do you say to the people out there who are wondering if this is some sort of inside job?’ He said that that was B.S. and he gave a very fair and rational answer. We moved on. Never heard anything from him or the Buccaneers.

“Fast forward to March, the league meetings. I’d never met Dirk Koetter, and I walked up to say hi to him. He chewed (me out) for 10 or 15 minutes. I tried to explain to him how this works. He didn’t want to hear it. It was awkward. At the time I felt bad. But the more I thought about it, the more I got upset because if you have a problem with what I said, don’t wait until you have a chance to jump me. Especially since my wife was with me.

What advice would you give to someone who wanted to be the next Mike Florio?

“Follow your passion. Do the things that you like. Be willing to find a way to put as much time as you can into it.”