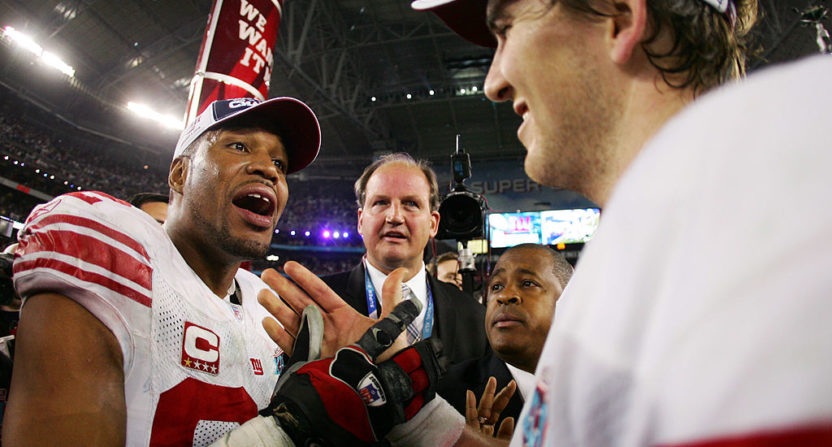 The months-long fight over an alleged memorabilia scam supposedly run by members of the New York Giants’ training staff and perhaps implicating quarterback Eli Manning is dragging on, and now it involves Michael Strahan and The Washington Post. At the Post, Will Hobson writes about how his request for an interview with Strahan around one of Strahan’s jerseys displayed in his home (the collector suing the Giants alleges that he has the original game-worn Strahan jersey from the 2008 Super Bowl, seen above, amongst other things) was cited in Strahan’s legal team’s response to a request for a deposition, with Strahan alleging he was working in concert with the plaintiff:

These are fairly wild claims, and I explained as much in an email to Strahan’s publicist, Jill Fritzo. But [collector Eric] Inselberg claims to have some evidence. He submitted his jersey to memorabilia experts who analyzed it along with magnified, high-definition photographs of Strahan taken during the game. According to the experts, Inselberg has the jersey that Strahan wore throughout that Super Bowl.

Acknowledging that Strahan is very busy, I asked Fritzo to pass along my request to interview him and take a look at his jersey, snap some photographs, and try to get to the bottom of this. If Strahan consented, I planned to submit photographs of his jersey to memorabilia experts, and see if we could get some kind of conclusive ruling on who actually is in possession of the jersey Strahan wore that day.

Candidly, I did not expect to get the interview, but it’s always worth asking. I gave my request roughly a five-percent chance of success. I figured Strahan’s in the media business, he seems jovial, maybe he’d want to chat and have some fun with this. Anyway, I didn’t think much of it when my first email, sent May 24, was met with silence, as was a follow-up, sent June 16.

And then, two weeks ago, my emails turned up in a surprising place: a court filing, written by Strahan’s lawyer. My emails, attorney Alison Greenberg wrote, are evidence that if Strahan has to testify in a deposition in this case, it could become a “media spectacle.”

“Is it a coincidence Hobson reached out when Plaintiffs had not yet taken Strahan’s deposition?” Greenberg wrote in the motion, filed June 19, asking the judge to rule Strahan should not have to testify. “We believe it is reasonable to conclude that Plaintiffs and/or their attorneys instigated Hobson’s inquiry and effort to meet with Strahan and inspect his jersey.”

Hobson’s piece stating that he wasn’t working with the plaintiffs at all and was reaching out independently to try to get to the bottom of this case seems much more reasonable, to be honest. This is a high-profile case, and it would of course benefit the Post (or any other news organization) to get a scoop by analyzing Strahan’s jersey and seeing how it compared. It seems highly unbelievable that a respected newspaper reporter would do anything at the plaintiffs’ request in a case like this, and Strahan’s attorney’s claims on that front seem bizarre (and not really a good reason to avoid Strahan testifying).

There’s no dispute that Strahan is a prominent media figure, especially between his weekend work for Fox NFL Sunday and weekday work for Good Morning America. And yes, any testimony from Strahan might indeed turn into a “media spectacle,” but that isn’t necessarily a good reason that he shouldn’t have to testify. It’s understandable that Strahan doesn’t want to be involved in this case, and that’s fair, but seeing sinister plots from media members trying to interview him feels like a bit much. And no one’s making him talk to Hobson, but why turn this into a conspiracy? Maybe just decline the interview request next time?