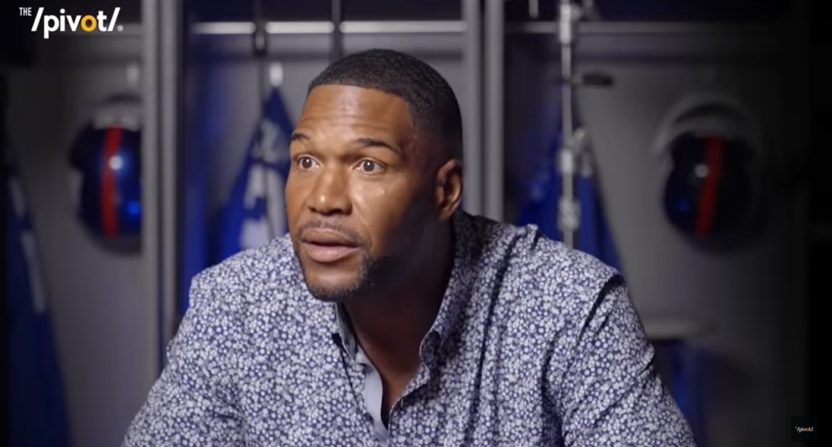 Despite infamous battles with reporters as a player, Michael Strahan perfected the pivot from star athlete to successful media personality.

Strahan recently joined The Pivot Podcast hosted by Ryan Clark, Fred Taylor, and Channing Crowder and during their conversation, the former New York Giants defensive end claimed his media exchanges as a player came from a place of wanting to keep reporters on their toes.

“I learned to use the media for my benefit in a lot of ways,” Strahan said. “I wouldn’t answer questions every day, I would tell them I’ll do it two days a week. It wasn’t cause I was mad at them, I just wanted to keep them on their toes. Certain days I’d say I’ll answer three questions today…other days I’d sit there and talk for 30 minutes like it was nothing.”

Strahan’s media bouts went beyond just deciding to take three questions on certain days. He quarreled with reporters for writing about Brett Favre’s apparent dive to hand Strahan the single-season sack record in 2001. Strahan boycotted the media during the 2006 offseason while his name was on the front page of tabloids and newspapers during an ugly divorce. And his most infamous moment may have occurred later in 2006 when bits of peanut butter and jelly flew out of his mouth as he chastised ESPN reporter Kelly Naqi. The incident stemmed from Strahan’s angst with Naqi’s reporting on a WFAN interview, where the defensive end accused his teammate Plaxico Burress of quitting.

It’s interesting to now hear Strahan spin that relationship with the media as keeping them on their toes, almost claiming he was aiding reporters.

“I kept them on their toes because I realized that they needed me to do their job,” Strahan continued. “I hate to say it that way, but as an athlete, I needed my mentality to be, you need me, I don’t need you and you’re telling me how to do my job…it’s easy to write about something you’ve never done. We can criticize anything that we’ve never done. But when you’ve done it, I think it gives you a different appreciation of what it takes to get it done and you’re more understanding of people.”

Former athletes enter the media with an innate knowledge of the sport they cover, but that shouldn’t discredit the thousands of reporters who lack playing experience. With Strahan’s logic, a coach who hasn’t played should not be able to criticize a player. A political analyst can’t critique the president without serving as the head of state and a food critic can’t write a review unless they were a chef.

Following his choppy relationship with the New York media, Strahan has transformed into a prominent member of the media himself. Currently, the Pro Football Hall-of-Famer is featured on Fox NFL Sunday and shows off his impressive versatility by co-hosting ABC’s Good Morning America among other media ventures. It’s been a successful pivot for Strahan, but one that not many would have predicted during those days he tried keeping reporters on their toes.