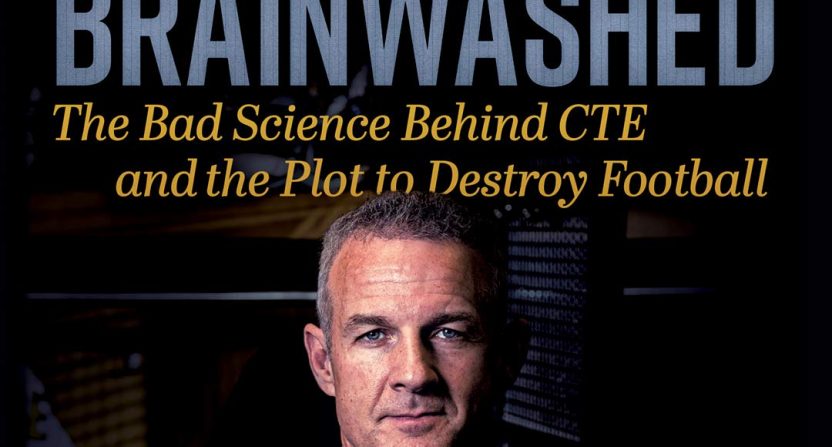 In news that will blow your mind, former NFL player and ex-ESPN analyst Merril Hoge has co-authored a book critical of CTE. The book, with the ridiculous title of Brainwashed: The Bad Science Behind CTE and the Plot to Destroy Football, was co-authored with pathologist Dr. Peter Cummings.

I am excited to announce the release of my new book, #BRAINWASHED!
BRAINWASHED delivers the TRUTH behind #concussions & #CTE.  To purchase your copy, CLICK HERE: https://t.co/lT0jM9hYea pic.twitter.com/KF10jLByEg

In a Yahoo op-ed, Hoge and Cummings reveal that in actuality, they’re concerned about the science (sure they are!) behind CTE research and hits to the head and concussions are still (maybe) bad.

For the record, we’re not saying that CTE doesn’t exist or suggesting that taking repeated hits to the head is a good thing. Clearly, something is causing neurodegenerative disease in some athletes, and something is leaving CTE’s distinctive protein signature in their brains. But there’s so much we don’t know: what causes it, if impacts to the head are really involved, how much exposure is too much, what clinical symptoms (if any) these physical signs might cause later in life, if other factors are involved, and more. There are too many unanswered questions to justify the fear and hysteria.

They also criticized the media for “peddling sensationalism” regarding CTE, concussions, and head trauma, which sure is an interesting take.

One of the arguments people are making is, “What’s the harm in being overcautious about hits to the head?” Good question. If the work of people like Dr. McKee is wrong and the media is peddling sensationalism and fear backed up by flimsy data, the harm is the impact this anxiety can have on people — young, old, and in between. The dire picture painted by the media could have a negative impact on mental health outcomes in athletes.

For the record, Hoge filed a medical malpractice lawsuit against a Chicago Bears team doctor more than 20 years ago, eventually winning $1.45 million after a jury ruled that Dr. John Munsell, the doctor in question, should have told Hoge that concussions and head trauma were actually bad.

Munsell should have sat Hoge down and explained the risks involved with the injuries he suffered at a preseason game Aug. 22, 1994 against Kansas City, Fogel said.

“Athletes in all sports will play through aches and pains unless they are aware of their significance,” he said during his closing argument Thursday.

Munsell did not inform Hoge or his wife about the possibility of brain damage and the symptoms relating to a concussion, Fogel said. He also failed to perform a “return to play exam” after the Aug. 22 game, he said.

Hoge also talked about his history with concussions on NFL Countdown in 2009.

Weirdly enough, some NFL pundits are actually heaping praise on Hoge for his tinfoil hat book!

Suzy Kolber dropped this doozy of a quote, where she seemingly criticized “the narrative of CTE.”

“I urge you to read Brainwashed. Thank you, Merril, for presenting us with perspective and taking to task the people who have owned the narrative of CTE.”

“Whatever your position on the subject of CTE may be, you should read this book. It contains information every parent and athlete should carefully review.”

Trent Dilfer, who suffered numerous concussions during his NFL career, jumped on the “hidden agendas” narrative.

“Reading Brainwashed was an eye-opening experience. It exposes the hidden agendas at play and bad science at work.”

“Brainwashed turns discussions [about CTE and concussions] upside down and gives them a good hard shake. A very interesting read.”

Trey Wingo said it was a “very interesting read.”

It's a very interesting read https://t.co/qw9SsG2l0I

This is a real shitty look for ESPN and its employees. Just because a former coworker comes out with a book, that doesn’t mean you need to give glowing quotes about it, especially when he and his co-author are essentially attacking journalism, your employer, and science.

To me, it’s absurd and not coincidental at all that this is happening just months after ESPN president Jimmy Pitaro talked about strengthening ESPN’s relationship with the NFL, which resulted in more hours for NFL studio shows (at the expense of Bob Ley, one of ESPN’s more ardent defenders of journalistic integrity, taking a six month sabbatical), the shield defending Joe Tessitore being slotted in the Monday Night Football play by play role, Chris Berman being brought back on a cameo basis, and the network hiring a rules analyst that the league wanted them to hire.

It’s shady, dishonest, and insulting to viewers, readers, and customers that so many ESPN employees are promoting Hoge’s book and seemingly backing this “plot to destroy football”. If I’m one of ESPN’s primary investigative journalists (Don Van Natta, Mark Fainaru-Wada, etc), I’m livid at my employer right now.