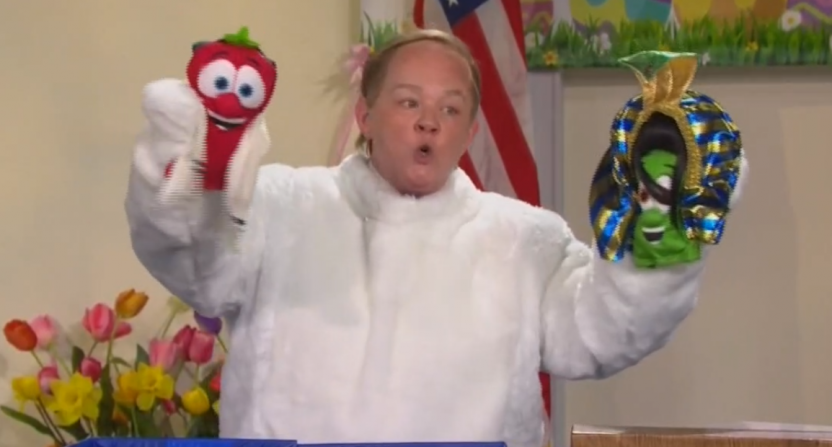 Following the controversy over White House press secretary Sean Spicer’s comments on Syria, Adolf Hitler and chemical weapons this week, many wondered if Saturday Night live would be able to get Melissa McCarthy (who’d already won plaudits for her previous portrayals of Spicer) in for this week’s episode, and if so, how SNL would handle it. Those questions were answered Saturday with a sketch of McCarthy dressed as Spicer dressed as the Easter Bunny, and one that involved everything from VeggieTales puppets telling “the story of Passover” to a reference to “concentration clubs” to a reference to former NFLer and long-time sports media broadcaster and personality Ahmad Rashad:

“Now in defending the president’s decision, I said that unlike Syrian leader, um, the leader of Syria…what is it, what is his stupid name? I got Bazooka Felicia Ahmad Rashad.” That’s a pretty great play on the name of actual Syrian leader Bashar al-Assad, and it’s definitely even funnier to sports fans familiar with Rashad. Born Robert Earl Moore, he starred at Oregon as a running back and wide receiver, then was picked fourth overall in the 1972 NFL draft and went on to play for the St. Louis Cardinals, the Buffalo Bills and the Minnesota Vikings, and changed his name in 1973 after converting from Pentecostalism to Islamic sect United Submitters International. Rashad may be most known for his broadcasting career, though, which has included everything from the NFL to the NBA to MLB to reality TV and game shows, and has spanned NBC, ABC, Golf Channel and now NBA TV. He’s also well-known for his many interviews with Michael Jordan. Here’s one:

Rashad’s career has had some strange twists and turns over the years, but “being referenced as the leader of Syria on Saturday Night Live by Melissa McCarthy dressed as the White House press secretary dressed as the Easter Bunny” might be the most unusual yet. However, that wasn’t even the best joke of this sketch. That goes to the Passover portrayal through VeggieTales puppets. “And then the Jews, these guys literally pass over. Literally. These guys literally float above the pharaoh, kind of like Crouching Tiger, Hidden Dreidel. I mean, it’s amazing. And they’re like ‘See you, Pharaoh, wouldn’t want to be you.’ And from then on, pretty much smooth sailing for the Jews.”