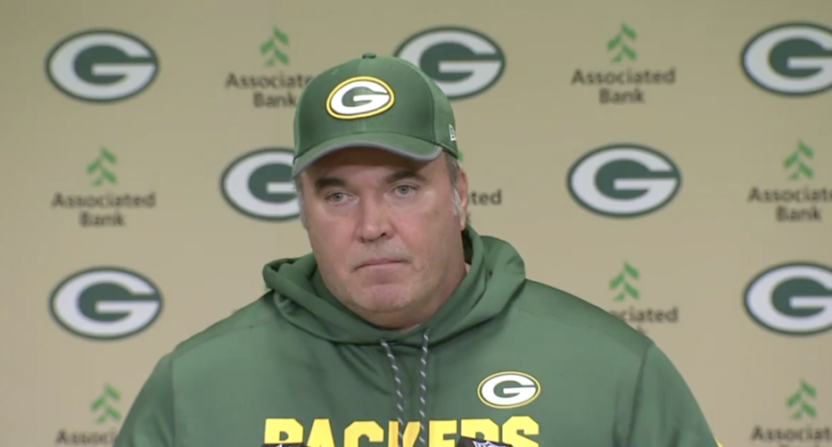 If you thought there would be a chance that Colin Kaepernick would be signing with the Green Bay Packers as a temporary replacement for the injured Aaron Rodgers, you would be mistaken.

After revealing Rodgers was going to be getting surgery on his broken collarbone, McCarthy talked about how he is going to shift his on-field focus to his backups, Brett Hundley and Joe Callahan and have Hundley give it a go at starter.

Soon after, a reporter asked if there would be any consideration to bringing in the former 49ers quarterback, who recently filed a grievance against the NFL for collusion. McCarthy immediately went off on his response, getting angry at the reporter for seemingly not hearing about how he is focusing on Hundley and Callahan.

While he probably could’ve handled this better, I can see why McCarthy would be upset about being asked about bringing in Kaepernick despite saying he was going with Hundley. If McCarthy felt it was a waste of his time to repeat what he just said, I get the frustration.

At the same time, whether you love or hate the man and his racial inequality views, Colin Kaepernick is dominating headlines and his name garners a reaction regardless of your opinion of him. McCarthy may mention everyone else and dance around it but the media is going to ask McCarthy, or any head coach who is in a situation where their starting QB goes down for a while, whether or not they are seriously going to consider signing Colin Kaepernick. If only to just clearly state it for the record because if nobody does, the reporters there would get crap for different reasons. It’s a “damned if you do, damned if you don’t” situation.

And I guarantee you, when this happens to another team and Kaepernick is available, the same thing is going to happen. A reporter will ask that question and the coach may react angrily. So if you are an NFL head coach, be prepared how to answer that question even if you felt you dealt with it seconds beforehand.