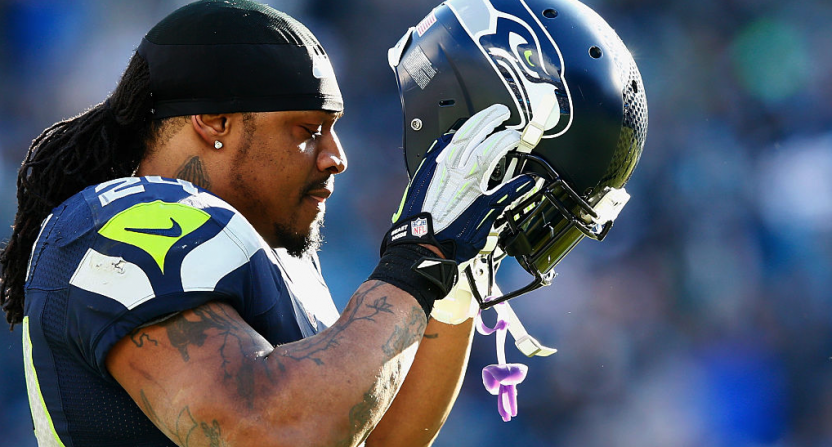 If you weren’t entirely swayed by the reports on Friday morning of Marshawn Lynch’s imminent return to the NFL, you can’t be blamed. Various NFL outlets have been pushing Lynch return reports over the course of the last year.

Back in May of 2016, former Seattle Seahawks teammate Richard Sherman was quoted saying he wouldn’t be surprised to see Lynch return the following regular season, even though he had just announced his retirement a few months before over Twitter during the Super Bowl. A report from Jason Cole put out shortly thereafter quoted two anonymous teammates who said Lynch was mulling a return for the 2016 season. Suffice it to say, that never happened.

But it wasn’t the last we heard that Lynch was supposedly returning. Last September, NBC’s Mike Florio, days into the start of the regular season, reported via an anonymous source that Lynch was mulling a return to the Seahawks, and that Weeks 4 and 5 were the likely “hotspots” for his unretirement.

Again, those dates passed and there was no Beast Mode. In fact, the entire 2016 season went by without Marshawn Lynch ever appearing on an active roster. Now, once again, we’re being told there’s a realistic possibility that Lynch could play for the Raiders in 2017, even though the player has expressed no public interest in playing again,and has his rights held by another team.

The latest conjecture was spurred by Raiders broadcaster Greg Papa, who said in a radio interview that the team is interested in bringing on a retired running back who didn’t play in 2016. ESPN’s Adam Schefter and Josina Anderson soon confirmed that the back in question is Lynch.

But aside from whatever interest the Raiders have, no one in the media has anything definitive on whether Lynch himself actually wants to return, which is by far the crux of the matter. What the Raiders would have to trade to the Seahawks for the right to sign him and whether they committed tampering by gauging his interest are potentially interesting, if moot topics for the time being.

Marshawn Lynch is in shape. He's thought about playing. Raiders are interested. But would the #Seahawks actually trade him? We'll see.

The NFL’s Ian Rapoport added on Friday that Lynch has “thought about playing,” which is vague language that isn’t any more definitive than any of other reports over the past year. Rapoport also noted that the Raiders tried to trade for Lynch in 2016 and it came close to happening, except it was held up by the fact that, yes, Lynch didn’t want to play.

If you want to be generous and play along, you could speculate that there’s fire behind the smoke of all these reports. Perhaps Lynch has grown more receptive to a return the more he’s thought about it. There are elaborate fictions to spin here, which makes it fertile ground for those who can sell them in convincing tones.

Except, there’s no evidence of this from anywhere but secondhand sources.

Pushing the possibility of a Lynch return continues to move the needle for the media because the guy is popular and still young enough that it could conceivably happen. And maybe there are associates of his or former teammates willing to push that story, but until he speaks to it himself, it’s worth ignoring.

Mike Tunison is a freelance writer, former editor of Kissing Suzy Kolber, and author of The Football Fan's Manifesto. He has no outrageous food takes though is interested in a bite of what you have there. Looks good.