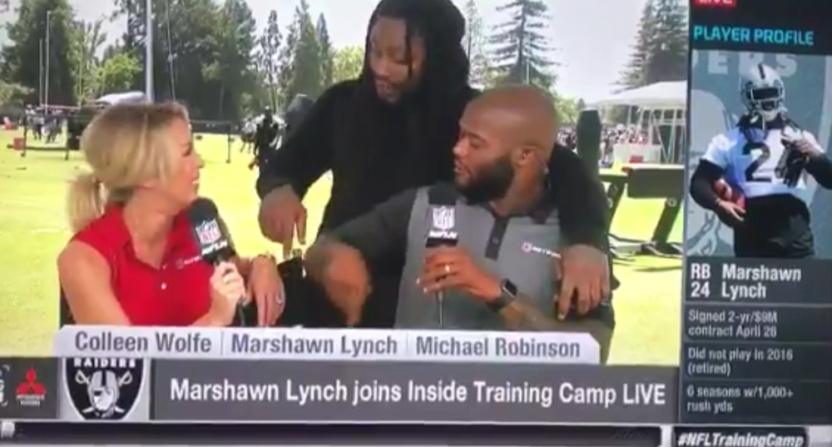 We’ve seen plenty of memorable media moments from Marshawn Lynch over the years, especially following his decision to come out of retirement and join the Oakland Raiders this offseason, and Monday gave us another one. Lynch dropped an incredible assortment of profanity in a press conference aired live on NFL Network in June, and jumped into the network’s report from Raiders’ camp Monday with Michael Robinson (Lynch’s former teammate and lead blocker in Seattle) and Colleen Wolfe.  There, he used “shit” a couple of times (despite Robinson going “You can’t say that on TV!”) and avoided questions Robinson and Wolfe tried to ask him. Wolfe eventually sparked a reaction when she asked about the Emeryville soul food restaurant he bought and talked about how she likes soul food, with Lynch going “So that’s our first date, to the soul food restaurant?”

Raiders RB Marshawn Lynch was on the NFL channel, and the interview was entertaining to say the least. Check this out. pic.twitter.com/RhIx5z7yQC

Robinson then informs Lynch Wolfe is married (to former Philadelphia media member and occasional Ringer writer John Gonzalez), and he then compliments her on her ring and says “So we’re not dating. We’re not going on a date to the soul food restaurant,” and she responds “I’ll bring my husband.” Lynch then goes “I’ll charge you a little extra just because, and I’ll charge him (pointing at Robinson) more too.”

Lynch being goofy is sort of par for the course at this point, and his swearing’s certainly not ideal for networks (and is perhaps more problematic in something like this where he’s jumping on camera, rather than the previous incident where he was just giving a press conference that NFLN chose to carry live), but it’s not really a big deal. Him asking out media members on camera is more of an issue, though, regardless of if they’re married or not. Wolfe is trying to be professional here and do her job (and she reacts well to this, something she surely wasn’t expecting), and Lynch is making that difficult by avoiding questions and hitting on her. And asking out a reporter during an interview seems inappropriate, regardless of their marital status.

There’s certainly no obligation for Lynch to talk to the media, and as we argued following his infamous 2015 “I’m just here so I don’t get fined” Super Bowl press conference, it’s often more newsworthy and more entertaining when he doesn’t follow the standard football player trend of spouting clichés. And even crashing live shots like this is defensible (it’s more fun for viewers than whatever Wolfe and Robinson would have said on their own), and while not answering questions and swearing on TV isn’t ideal, that’s entertaining too. However, it would be nice if Lynch wouldn’t hit on media members during an interview, and if others wouldn’t follow suit. The media are there doing their job, not looking for dates, and that should be respected.

Here’s a look at some of Lynch’s other weird media run-ins over the years: