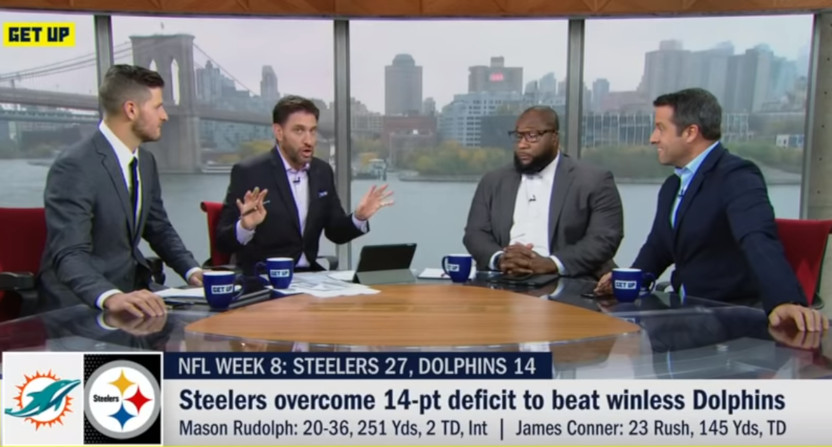 Plenty of sports punditry is trending from actual analysis towards hot takes, but if you’re going to drop fiery takes, you might want to make sure they can’t easily be refuted. It’s the difference between Stephen A. Smith yelling something ridiculous like “supposedly people have anxiety, I mean, stop the presses!” (that’s an opinion, even if it’s a bad one) and between him making factual mistakes, such as spotlighting the supposed Derrick Johnson versus Hunter Henry matchup, calling Dwayne Haskins “more of a runner than a thrower,” and confusing Luke Voit and Luke Falk. And a trio of ESPN pundits on Get Up appeared to take the latter approach Tuesday, making absurd claims about a Miami Dolphins’ supposedly-tanking playcall in Monday night’s game that were called into question by some research from For The Win’s Steven Ruiz. First, here’s the play in question, where the Dolphins sent eight rushers in a cover-zero blitz and were beaten by a throw underneath that went for a touchdown:

#Dolphins sent an all out blitz on 3rd-and-20 with 20 seconds left in the half.

Before we get to what the Get Up panelists said about this, though, it’s important to break down a key distinction in what’s being talked about here. Yes, the Dolphins absolutely appear to be tanking to try and gain the #1 overall draft pick; that’s pretty well–supported thanks to their various trades of players for draft picks. But tanking (at least at the levels we’ve seen so far in professional sports) tends to be a front office move, not a move about intentionally reduced efforts from coaches or players.

Coaches still have incentive to win, and players have incentive to perform well; stronger performance can see them hit contract incentives or be more in-demand going forward. And accusing players or coaches of deliberately throwing a particular game, or even a particular play, is a pretty serious allegation, especially in an era of expanded legal gambling on sports; you might want to have some evidence before you pull that out. Or you could just do what the Get Up crew of Marcus Spears, Dan Orlovsky, and Mike Greenberg did Tuesday (Dan Graziano was also on the panel, but didn’t make these allegations) and allege that players and coaches were tanking without much evidence (and with some specific evidence to the contrary):

At around1:55 where Orlovsky walks back his own previous logic that the Dolphins aren’t tanking by talking about a particular playcall, the cover-zero blitz they delivered before the half that resulted in a Pittsburgh touchdown. “I was like, ‘Aw, man, coaches don’t tank, players don’t tank.’ This play, I don’t know. I mean, they blitzed eight guys and did not cover anyone else. And to Mina [Kimes]’ point, that’s why she drew the tank on the field. I’ve never seen anything like that.”

As Ruiz noted, at least three NFL teams have sent cover-zero blitzes in third and long this year (with varying degrees of success). Others added further examples. And Ruiz wrote that the trend goes beyond that:

Cover 0 blitzes aren’t that rare in 3rd-and-super-long situations. Since 2016, teams have sent the house with no safety help 23 times on 3rd-and-11-plus, per Sports Info Solutions. The first-down conversion rate on those plays is about 20%, which isn’t much higher than the overall conversion rate (17.3%) in those situations.

A cover-zero blitz in that situation is a high-risk (get burned and it’s likely a touchdown), high-reward (get to the quarterback and you can generate a sack or maybe even a fumble) gamble, but it’s hardly evidence of throwing the game with a playcall. And while the Dolphins’ players don’t execute this particular play very well, there’s nothing to indicate that that’s purposeful failure.

Update: Orlovsky offered some thoughts on Twitter on why he thought the specifics of this playcall made it more unusual than your standard cover-zero blitz:

I’d love for you to show me where another team has 0 blitzed 8 defenders, covered with 3 from a 15 yard depth and play a pass off combo coverage within it…in a moment of a game that was normal

And that may be an accurate statement-and that’s why I said only other time I’ve ever seen anything like it is Hail Mary situation. But for a defensive HC who is details coach to have a relatively simple scheme look that disastrous doesn’t add up

It wasn’t just Orlovsky bashing this playcall. Spears goes on to say (2:15) “If I’m (Dolphins’ CB) Xavien Howard and I see them call this defense here, I’m like ‘I see what this is for real.’ And everyone was thinking the same way last night. I put the same tweet up, ‘Miami’s really tanking!’ Visually, that was a tank!’ And Greenberg goes on to say “We talk all the time about how organizations tank but players and coaches don’t. That is a defense on that play that is inexcusable, right? There is no other way to defend it.” And Spears responds “G, I played in this league nine years, and if my coach called a play like that on third and 25, we having a damn fight on the sidelines. …That’s a gimme play. That’s almost like ‘Let them score so we can get the ball back.”

As Ruiz notes, cover zero blitzes in third and long have been called by the likes of Bill Belichick. And Dolphins’ defensive coordinator Patrick Graham worked for Belichick for a long time (2009-15, as did head coach Brian Flores (2004-18); it’s certainly conceivable they picked up the cover-zero blitz on third and long there. Or they could have picked it up almost anywhere; as per Ruiz’s piece, this has happened at least 23 times since 2016, and it’s only led to a first down 20 percent of the time. Orlovsky has a point that the specifics here aren’t necessarily the same as those other cover-zero blitzes, but that doesn’t necessarily equal a tank.

Criticism of the Dolphins’ playcall is fine (although it’s now mostly outcome-based criticism rather than decision-based criticism), and criticism of particular players’ performances on this play is fine. But saying a playcall was deliberately designed as part of a tank is a bold statement.