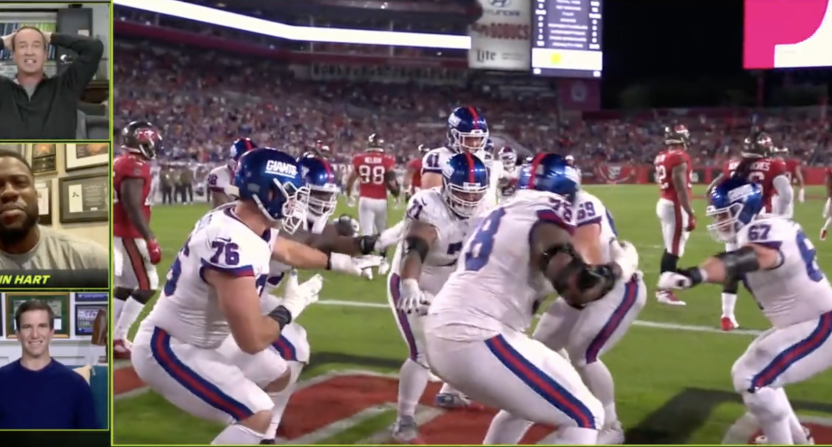 ManningCast was back for Week 8’s Monday Night Football matchup between the Tampa Bay Buccaneers and New York Giants. While the game itself, won by the Bucs 30-10, wasn’t terribly exciting, Peyton and Eli made things interesting thanks to some special moments and insights from guests Bill Parcells, Kevin Hart, Dr. Condoleezza Rice, and Julian Edelman.

While plenty of fun was had by all, let’s check out the five most pertinent highlights from the festivities.

This week’s broadcast saved the best for last as Julian Edelman arrived in the fourth quarter to bring some much-needed entertainment to a very boring football game. He started by dropping an interesting nugget about when Tom Brady tried to recruit him to play for Tampa Bay, an offer he not-so-politely declined.

Edelman’s highlight came in the game’s final moments as Rob Gronkowski and Brady were seen talking on the sideline and Edelman was asked to infer what his former Patriots teammates were discussing. Hilarity ensued.

Wherever Peyton Eats, We Will Find Him

Peyton has developed a weird habit of devouring large amounts of food relatively quickly during broadcasts. While he was able to evade eating directly on camera this week, that doesn’t mean he didn’t get caught.

Somehow, Peyton made his eating breaks even weirder. #ManningCast pic.twitter.com/njgW6fj1on

Kevin Hart appeared in the second quarter and was let loose on the broadcast, sharing tales of playing football in Thailand and digging into the inner workings of the Eli Manning Face.

Kevin also made sure to dig the knife on Eli, who was not enjoying his evening as a Giants fan.

"Well, Eli, it's an exciting time for me, unlike the Giants." – Kevin Hart #ManningCast pic.twitter.com/GFZgDmOOS9

Perhaps the funniest part when the end of Kevin’s time on the ManningCast, which seemed to come as a surprise to Kevin as it was happening.

Kevin Hart's time on #ManningCast is over, much to the surprise of Kevin Hart. pic.twitter.com/IFsRIFD2dj

Rookie Peyton Would Have Made Bill Parcells Rethink Life

Bill Parcells stopped by in the first quarter and reminiscent about his years as a head coach in the NFL. Eli brought up that Parcells’ Jets would have been in a position to draft Peyton had he come out as a junior and he wondered how the coach would have handled the 28 interceptions that Peyton threw in his first season. Not well, apparently.

Bill Parcells on if he would have drafted Peyton Manning when he was head coach of the Jets.

During Hart’s appearance, the Giants got a bright spot in the form of tackle Andrew Thomas catching a touchdown and then doing a celebration dance as only a Big Man Touchdown can be celebrated, Kevin was not impressed by any of it.

You can’t please everyone.

The ManningCast returns on December 6 when the Buffalo Bills take on the New England Patriots. Hopefully, they’ll get an active NFL player on that episode so that we can confirm if the ManningCast Curse is still in effect. In the meantime, Happy Thanksgiving, especially to Eli who doesn’t have to watch his brother eat this year.