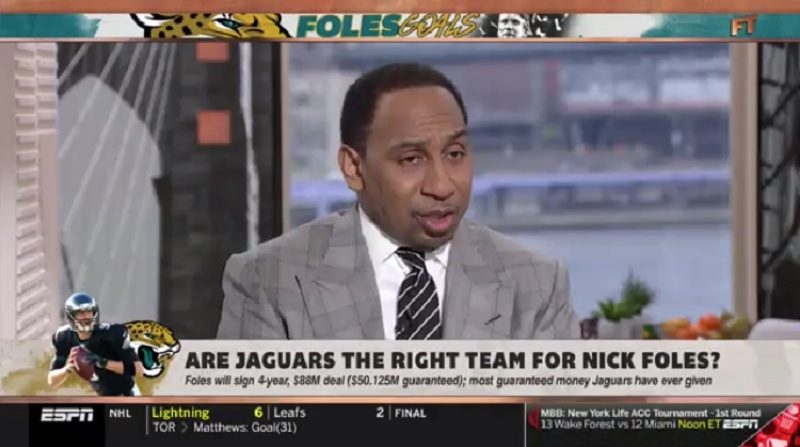 There isn’t much more we can say about Stephen A. Smith’s half-assed approach to debating football topics. On Tuesday’s edition of First Take, Smith was talking about the Washington Redskins’ quarterback situation, and mentioned that Washington started five players at quarterback last season…including Tress Way.

Tress Way is a punter. He has been Washington’s punter since 2014. He threw one pass in the 2018 season, and that came in the final Redskins game of the season, a 24-0 loss to the Eagles.

I get it. It can be very confusing to go to a stats page, see a whole bunch of quarterbacks listed, and assume that all of them, including the one with a “P” next to his name with one pass thrown (and completed!) started a game for the Redskins this year.

Smith is no stranger to ridiculous gaffes. This NFL season alone, he showed he had no idea who actually plays for the Chiefs or Chargers, got taken to the woodshed by colleague Louis Riddick and NFL Network’s Michael Irvin for his absurd Josh Gordon takes, got ethered by the Arizona Cardinals, “forgot” to put Drew Brees on a list of the best quarterbacks in the playoffs, thought Kareem Hunt played for the Saints, claimed Dwayne Haskins was more of a running quarterback than a throwing one, and thought Le’Veon Bell should go to the Panthers.

But this is why researchers exist. This is why preparation is so important. And this is why (among other reasons) sports talk on television is so difficult to watch on a regular basis.