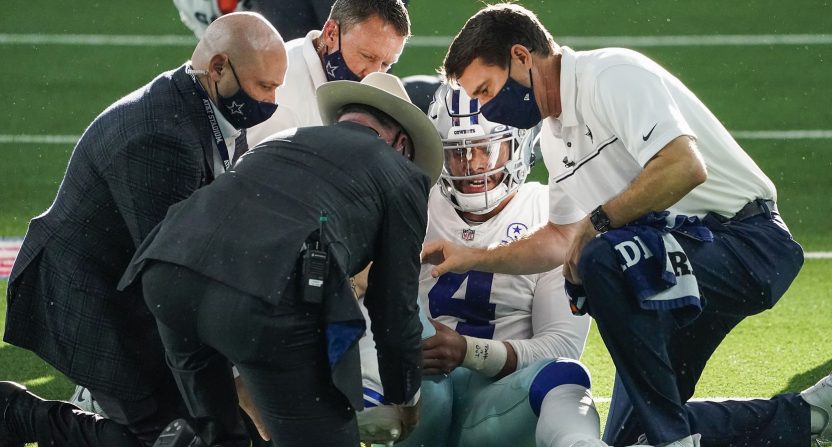 The Dallas Cowboys were already sliding down the rankings in the minds of many TV talking-head pundits. Actually, the term I heard used was ‘Texas Teams.’

The Dallas Cowboys started with a 20-13 loss against the Los Angeles Rams. Then they moved on to play a horrendous Atlanta Falcons squad to get an ugly one-point win, allowing the Falcons to put up 39 points of the Cowboys home defense. Next, in Week 3, America’s Team headed up to the Emerald City to face the Seahawks, where they were prompt squashed 38-31. Hopes we high heading back home to Arlington to host the Cleveland Browns. But alas, once again, they were dashed—this time by a double-digit home loss to the Dogs.

But Week 5 held arguably the worst team in the league coming to AT&T Stadium. Thankfully, the boys got the win—barely. But it also cost them Dak Prescott. Dallas’ starting QB is likely out for the rest of the season, and it will be interesting to see what happens to their NFL Futures odds now that their titular player is sidelined.

Many questioned where Andy Dalton would fit in with the Dallas Cowboys organization. Well, here’s your answer. Andy Dalton is a seasoned veteran with nine years as the go-to guy for the Cincy Bengals. In that time, he racked up 31,594 passing yards, 204 touchdowns, and a career rating of 87.5 with a 62 percent completion rate. Though not immune to INTs, Andy Dalton is roughly at a 2-1 TD to INT ratio.

But how well will he play in his first appearance for the Cowboys? I do believe he has what it takes to lead this team. However, making the transition as a back-up over a stunted off-season where there was very little time in camps to build rapport with his teammates, we could see a rocky first showing. That said, he’s a consummate professional, and he could come out with guns blazing.

The early odds on the Cardinals @ Dallas have Arizona listed as 2.5-point favorites, per BetOnline. I have a feeling that number will creep to 3 points and eventually to 3.5, at which point it might be a good idea to hop on the Cowboys to get the backdoor cover.

The Cardinals are the epitome of average. They have an FPI of -0.1. Unfortunately for Dallas fans, the Cowboys are pretty well under average with an FPI of -3.3. This would indicate that on neutral terrain, the Cards should win by a field goal. But, home-field advantage is worth 3 points in the NFL so, we should have a pick ’em instead of a point spread. Now, is this because of Dalton? Would the line be a pick ‘em if Dak Prescott was ready to play during Week 6’s Monday Night Football event?

What it comes down to is the No. 1 home scoring team and No. 1 home passing team in the league going against the No. 22 road scoring team (No. 28 in passing) and No. 4 road rushing team. The Cowboys’ rush defense is dead last in the NFL, so we could see the Cardinals win this game by controlling the clock. That said, both teams rank 24th in yards per play (home & away) and 28th in time on field.

The verdict, it’s going to be a sloppy game all-around. The big X-factor is Andy Dalton. He could keep that passing train rolling, or he could stumble out of the gate if Dalton plays well. I think this game stays close. If not, the Cardinals could blow the Cowboys out in their stadium.

For now, I don’t see anything that makes me think there is a clear betting advantage either way, so I’m holding off on this game until I have some more information.