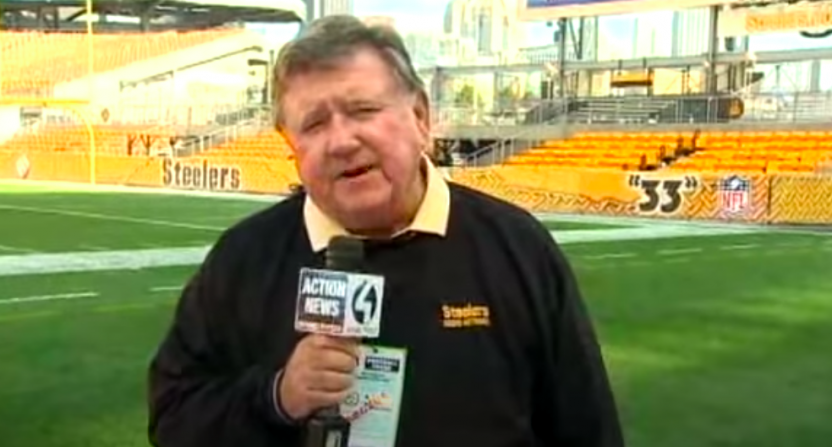 Bill Hillgrove, who has served as the radio play-by-play announcer for the Pittsburgh Steelers since 1994, was charged with drunken driving in Murrysville, PA this past Monday, according to a criminal complaint.

Hillgrove, who also works as a commentator for Pitt football and basketball games, was charged after he crashed his car into Ferri’s ShurSave supermarket, breaking two building windows, according to police. The 80-year-old was pulling into a parking spot right in front of the store when he kept driving and smashed into it. Hillgrove continued into the store to fill a prescription, then got back into his damaged car and left. Per the report, a witness said Hillgrove was “weaving on the sidewalk” as he left his vehicle.

After the incident was reported, police say they found Hillgrove at home where he admitted he “had a couple beers.” When asked about the incident, he reportedly said “that car just got away from me. I’m telling you that car just got away from me.” He consented to a breathalyzer test, which found that he had a blood-alcohol level of 0.16%, twice the legal limit to operate a vehicle in Pennsylvania.

A hearing is scheduled for August 11. Both the Steelers and the University of Pittsburgh declined to comment on Hillgrove, and it remains up in the air what fallout might come from the incident.

Hillgrove first started calling Pitt Panthers games in 1969 and he received the Woody Durham Voice of College Sports Award from the National Sports Media Association (NSMA) in 2019. He was also the 2007 winner of the Chris Schenkel Award, presented by the National Football Foundation. Hillgrove was personally picked by Steelers owner Dan Rooney to take over as the voice of the Steelers following the retirement of Jack Fleming in 1994.