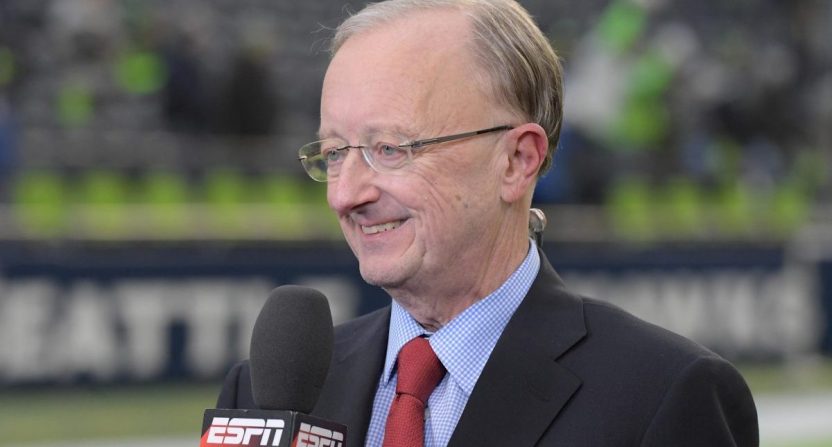 Hall of Fame NFL writer and reporter John Clayton died on Friday after a “battle with a brief illness,” according to the Seattle Seahawks. He was 67.

Rest In Peace, The Professor. pic.twitter.com/xFGdTYstnT

The news was first reported by friends and colleagues of Clayton’s. Chris Mortensen — a longtime colleague of Clayton’s at ESPN — reported that John’s wife, Pat, asked the Seahawks to release further information. Mortensen added that Clayton “passed peacefully.”

John Clayton passed away today at a Seattle area hospital. His wife Pat and sister Amy were at his side and communicated earlier he passed peacefully after a brief illness.
We loved John. We are mourning his loss.
Pat has asked the @Seahawks to release further information.

My friend of 22 years John Clayton died. He was one of those colleagues who was not only always eager to help you, but went above and beyond to help. He took his work seriously, with all his files and spreadsheets, but not himself. RIP to a gentleman and Hall of Famer.

I’m heartbroken to hear the news of my dear friend John Clayton’s passing. He was so kind and gracious with his time I will forever be grateful. I pray ?? for peace that surpasses understanding for his wife Patricia and his friends and family. RIP pic.twitter.com/9iWw6RmQl2

He also starred in the greatest This Is SportsCenter commercial of all time.

Clayton is one of the most respected reporters in NFL history, best-known for his work with ESPN from 1995-2017.

“The Professor” was known for being a true pro at the job, but also showed off his personality and sense of humor frequently, as demonstrated by his classic “This is SportsCenter” commercial (shown above).

The Seattle-based reporter spent the last few years contributing for ESPN Radio in Seattle (Seattle Sports 710 AM) and 104.3 The Fan in Denver. He also spent five seasons as a reporter for the Seattle Seahawks Radio Network.

Life will be different for Broncos with Russell Wilson. We will explain at 104.3 The Fan in Denver. https://t.co/l6zRfFSGTg

In 2007, Clayton received the Dick McCann Memorial Award from the Pro Football Hall of Fame. The well-deserved honor recognizes “long and distinguished reporting on professional football.”