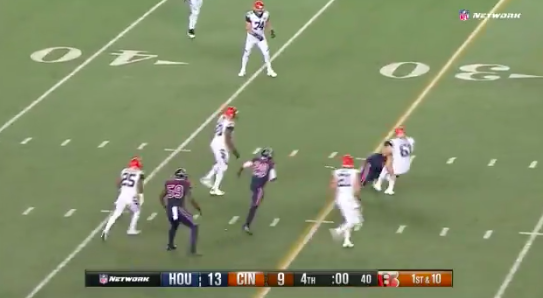 There was also the final play of the game – a zany multi-lateral attempt by the Bengals to get into the endzone that ended with J.J. Watt spiking center Russell Bodine into the Cincinnati turf like he was planting Baker Mayfield’s Oklahoma flag. It was the perfect ending.

Unfortunately for local fans in Houston, they may have missed that final exclamation point as local station KPRC cut out early according to the Houston Chronicle. The network went right to the local news at 10:30 PM local time. The clock did read all zeroes before the officials put a couple seconds back on for the Bengals’ attempt at the Stanford band play. However, it was an awfully quick trigger finger by the local affiliate.

Oops. @KPRC2 , the Houston NBC affiliate, jumped the gun and went to local news before the Bengals' final play. #Texans

It was right at 10:30 p.m. when @KPRC2 went to local news. They really wanted credit for that full quarter-hour rating from @Nielsen.

Hey @JJWatt thanks to @KPRC2 , we got to see local news instead of that massive tackle to end the game…..can you do that again next week?

@KPRC2 : "There's only a couple seconds left, let's cut to the news. Not like anything cool will happen…"

How many people missed that tackle b/c @KPRC2 broke in before the game was finished? What a joke. Glad I had NFL network to flip to.

The Texans may not win that many games this season so it would have been nice for local fans to enjoy the fullness of their victory instead of cutting away. Sure, the clock situation was a little confusing and there was something like a .000000000001% chance the Bengals were actually going to get a touchdown on that play (and maybe a similar chance they’ll get in the endzone period this year), but it’s still a bummer for the local fans that didn’t have the presence of mind to immediately flip to NFL Network. How many times do you get to see an all-world defensive lineman spear an offensive lineman trying to run with the ball like he’s Bill Goldberg?