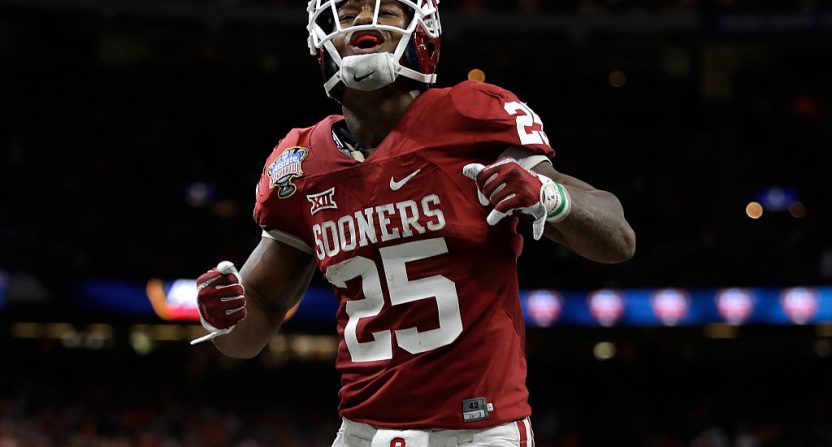 Joe Mixon has been a hot topic in the sports world for months now and especially in the past couple weeks as we approached the NFL Draft. Just a couple days ago, the Cincinnati Bengals drafted him in the second round of the 2017 NFL Draft.

Less than a week after the Bengals drafted Mixon, a local Cincinnati TV station is calling for fans to boycott the team.

WCPO is the station in question and on Saturday, it released a scathing editorial outlining why it was bad for Cincinnati to draft the troubled running back and why fans should no longer support them.

“This time the Bengals have gone too far.

Over and over, the Bengals have drafted, signed and stood by players with troubled legal backgrounds or other concerns that make them less-than-stellar role models.

But the Bengals drafting Oklahoma running back Joe Mixon — on top of the team’s tacit support of Adam Jones — is disgraceful.

Mixon punched a woman in 2014, shattering four bones in her face. He entered a plea that allowed him to maintain his innocence while admitting that the prosecution had enough evidence to convict him.

But maybe that was a one-time mistake?

Maybe… except then last fall he was suspended for a game by Oklahoma after a dispute with a parking attendant.”

Over at The Comeback, our own Matt Clapp wrote about the Bengals drafting Mixon and how it made too much sense given their history of signing players with questionable histories.

Adam Schefter also pointed out during the draft that only four teams even considered drafting him.

In an anonymous survey over past week with all 32 NFL teams, only four said they would consider drafting RB Joe Mixon. But only takes one.

And as Schefter said, it only takes one. It just so happens the team who drafted him is now faced with a local TV station calling for fans to boycott the team.

“The Bengals can’t control how a player acts. But they can control how the organization handles incidents’ like Adam Jones’ arrest. The team can control the types of players it signs, drafts and trades for.

It’s time we as fans tried to teach this team a lesson. We say tried because at this point, we have to wonder if the leaders of this team will EVER get it.

Maybe the only way is through the Bengals’ pocketbook.

We are urging every Bengals fan to take drastic action.

Instead of buying a Bengals ticket this year, take the $50 or more you would have spent on that ticket and donate the money to a nonprofit that works to prevent violence against women. We have included a list of organizations below.

Enough is enough, Bengals. We can excuse another season without winning a playoff game.

We can’t excuse drafting a player like Joe Mixon.”

Those are pretty harsh words from WCPO, and one would imagine they probably won’t be requesting access to the Bengals this season. At the same time, the points they make are pretty coherent and smart.

Adam “Pacman” Jones is a perfect example. The defensive back and return specialist is still employed by Cincinnati despite his lengthy rap sheet. Jones has been arrested multiple times and seemingly runs into a suspension and or legal issue every single year. Despite all of this, the Bengals still pay him.

So why is Mixon the final straw for WCPO? As they point out in their editorial, the video and more recent issues involving Mixon are brutal.

“There’s absolutely no excuse for Mixon’s action. He is a muscular, 200-plus-pound college athlete.

Even Oklahoma coach Bob Stoops admitted after he saw the video last December that suspending Mixon for an entire season was not enough punishment.

But apparently the Bengals don’t care.

Drafting Mixon shows that at least one team — our hometown team — has learned nothing from the Ray Rice incident.

A man hitting a woman is not OK. Drafting Mixon says the Bengals think it is.”

While I was watching the draft, someone commented to me about how Ray Rice was basically kicked out of the league and yet Mixon can still be drafted and given a chance to play. WCPO made the same comparison and its a perfect one at that.

The duo did something very similar, but for some reason one of them will likely never play in the NFL again while the other was recently drafted in the second round.