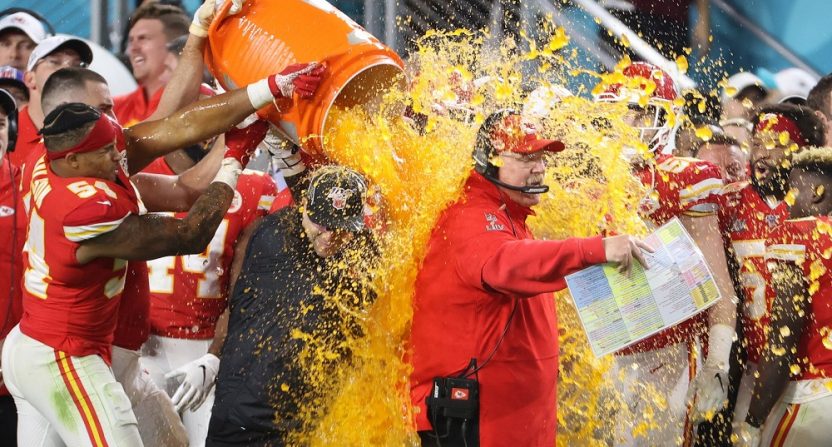 The Kansas City Chiefs ended a 50-year championship drought by winning Super Bowl LIV, 31-20, over the San Francisco 49ers. Most of us heard the call on Fox from Joe Buck and Troy Aikman. But it’s always fun to hear the hometown radio call of a team winning a championship.

Mitch Holthus has been the radio voice of the Chiefs for over 25 years. He’s probably best known for his signature call of “Touchdown, KAN-SAS CITY!” But every play-by-play announcer wants to call a big moment during his or her career. And for those who have covered a team as long as Holthus has done with the Chiefs Radio Network, there could be no bigger moment than winning the Super Bowl.

Holthus brought all of that history, all of that experience to his call of Super Bowl LIV’s final seconds. He knew how much this meant to Chiefs fans, how the story of Andy Reid coaching a championship contender in Kansas City culminated in football’s biggest victory. Here’s how that sounded:

“Andy Reid made a decision to come to Kansas City,” Holthus said. “Everything changed. And in seven years, they have become one of the most popular professional teams in the world with Patrick Mahomes and this wonderful team.”

“The game is over. And the Chiefs Kingdom has finally planted its flag on top of football’s highest summit!” said Holthus, once the clock at Miami’s Hard Rock Stadium ran to 0:00. “The Kan-sas City Chiefs are champions of Super Bowl LIV. Final score Kan-sas City 31, San Francisco 20. And Chiefs Kingdom, get ready to welcome your champions.”

The call #ChiefsKingdom has waited a half-century to hear. @Kevinharlan had the call on Westwood One. pic.twitter.com/1Ui9odDvjk

Perhaps making the moment even more special was that Kevin Harlan was calling Super Bowl LIV play-by-play for the Westwood One Radio Network. Harlan was the radio voice of the Chiefs before Holthus, from 1985 to 1993.

“The benches will empty! And this one is over. Kansas City has won their first Super Bowl in 50 years,” Harlan said, bringing his own sense of history to the call. “50 years a lifetime! And they do it in come-from-behind fashion, beating San Francisco, 31 to 20, in Super Bowl 54 with Patrick Mahomes leading the comeback. He is the Super Bowl 54 MVP!”

Like Holthus his call, Harlan reminded listeners how long of a wait Andy Reid had through his accomplished coaching career before finally winning a Super Bowl.

As a bonus, here is Harlan’s call of Damien Williams’ go-ahead touchdown to give the Chiefs a 24-20 lead that essentially clinched their Super Bowl victory:

And here's the go-ahead score from Patrick Mahomes to Damien Williams.#SBLIV belonged to #ChiefsKingdom from that point forward.

“Four wide, Mahomes in the gun, shotgun snap, fakes the handoff, rolls and throws a shuttle pass,” Harlan narrates. “Caught and running to the five, to the pylon on the near side by Williams. Touchdown! He got in! The Chiefs have taken the lead in Super Bowl 54!”

That’s a moment Chiefs fans will surely savor for generations. Harlan getting to make that call for a team he once covered feels like the universe working just right.