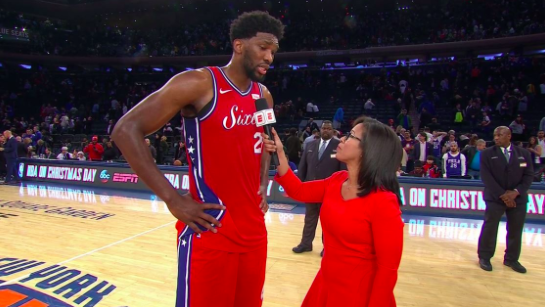 While most of us enjoy the day off on Christmas Day there are still plenty of individuals that have to work, including the athletes that entertain us through marquee holiday matchups. This year LeBron James and J.J. Redick both voiced the fact that they’d love to be able to have the holiday off to spend with family.

And with those games taking place there are hundreds, if not thousands of employees that have to work those games as well – stadium vendors, ushers, security, writers, production staff, and the announcers who call the games.

One person in particular had a busier Christmas Day than most. ESPN sideline reporter Lisa Salters actually worked two games on Christmas Day. First, she was on the sidelines for the first NBA game of the day in New York City between the Sixers and Knicks at noon. Then she had to travel to Philadelphia to report on the Monday Night Football game between the Eagles and Raiders.

The logistics are hive-inducing. She’ll spend the start of Christmas morning with her 4-year-old son, Samuel. At 8 a.m, a car service will arrive at her Baltimore home to drive her to New York City. She’ll arrive at Madison Square Garden around 10 a.m., be out of the makeup department by 10:30 a.m., and hustle to talk to players and coaches on both teams before the noon tip-off.

Once her ABC broadcast responsibilities are done, she’ll hop in another car and ride down I-95 to make it to Philadelphia, where she’ll go over any last-minute production notes before joining Monday Night Countdown for news updates. Kickoff isn’t until 8:30 p.m., so she likely won’t get home until after 1 a.m.

I’m sure there weren’t many people yesterday that had to wake up and travel from Baltimore to New York City to Philadelphia and back to Baltimore. Salters’ colleagues were definitely appreciative of her effort on the holiday.

Lisa Salters is the real MVP today in sports media. Worked the Sixers-Knicks ESPN game in NYC at noon. Then MNF tonight in Philly for Eagles-Raiders.

Lisa Salters is one of the greatest pros in this industry. She always brings it and if she has to work on Christmas it's great she gets to cover her hometown squads. Salute, @saltersl! https://t.co/ubaXnLTqqY

Assignment one almost done. After @saltersl conducts her postgame interview w/ Joel Embiid at MSG, she'll get in a car bound for Philly to cover tonight's #OAKvsPHI #MNF game on ESPN. pic.twitter.com/PzsUjSmhFO

12 hrs after starting her #Christmas double assignment, @saltersl is ready for some football at the Linc in Philly. She starts a well-earned vacation tomorrow after covering both NBA & #MNF games today. #OAKvsPHI pic.twitter.com/hDOqsv42Nv

Salters is from the Philadelphia area, so it was a special opportunity to cover both Philly teams in the same day. Combine the travel and the prep work needed to cover two games in two cities in two different sports and it has to stand as one of the most impressive broadcast feats in 2017. The fact that it happened on Christmas Day makes it all the more impressive.