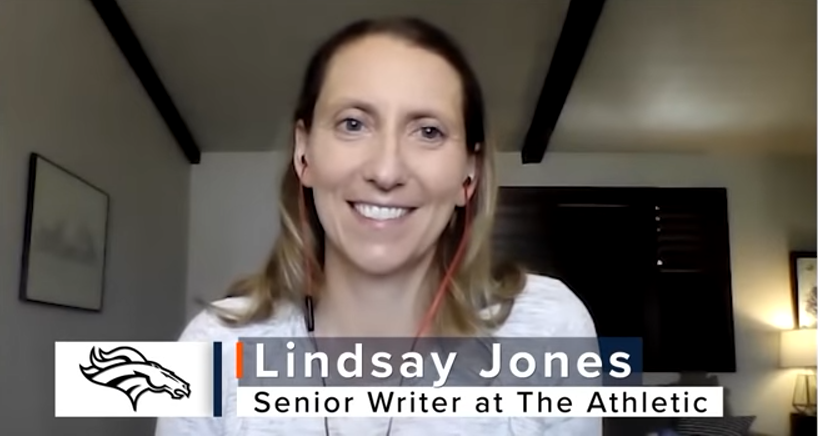 Lindsay Jones has been a notable voice covering the NFL for quite a while now. Jones’ work on that league includes time covering the Denver Broncos and the NFL for The Denver Post, time covering the NFL as a whole for USA Today Sports (we mentioned her as one of their more notable voices back in 2013), and time with The Athletic focused on NFL features and longform since 2018. Jones has also been a key figure in the cross-outlet media organization The Pro Football Writers of America, serving as a vice president there for years and as the organization’s president since 2021: she and that body played an important role in the ultimately-successful push to get writers locker room access again for the upcoming season following years of COVID restrictions. On Wednesday, Jones (seen above in an interview on the Broncos’ digital show The Snap last April) announced she’s headed from The Athletic to The Ringer, and said she’ll be focusing more on editing there:

And we're back with more ✨ personal news✨

I'm excited to share that I have joined @ringer as a senior editor, where I'll be helping lead the NFL coverage.

This is a career pivot, and one I've been thinking about for quite a while. I'm ready for the challenge.

Lena is Jones’ daughter, and her football insights and predictions have become quite a thing:

Lena’s analysis of Broncos-Chiefs: “If you mixed their helmets together it would be purple!” and “I just saw a hamster!” (KC Wolf ?)

Lena: "What just happened?"
Me: "Kyler Murray just did something dumb."
Lena: "It's OK if you call something dumb. But you can't say it about a person."

? We have Beary good news: It's time for Lena's Super Bowl pick! ?
Will it be ? or ??
And who will win MVP?
Lena knows! pic.twitter.com/CFbd2cexYN

It’s certainly interesting to see a prominent NFL media member like Jones not only switching outlets, but switching roles. And this is perhaps a moment to spotlight the importance of outlets’ editors and coverage-shapers; they don’t always receive a lot of public credit without bylines on a piece, but they play a vital role in how an outlet’s coverage comes together. (Jones’ tweet here does illustrate that she’ll continue to have public-facing roles, though, including on podcasts, which are a big part of the equation for the Spotify-owned The Ringer. And podcasts can be an excellent way to show off some of the editing and coverage-shaping talents a media organization has.)

Throughout her career, Jones has shown a great understanding of what makes for interesting stories, both on and off the field. Some of her recent Athletic work includes a NFL 40 under 40, a look at where the league’s Pride efforts are at a year after Carl Nassib came out publicly, and an analysis (with Ben Standig) of the key takeaways from Roger Goodell’s congressional testimony on the Washington Commanders. A few of her many other notable recentprojects include a February feature on Von Miller’s memories of Demaryius Thomas, key reporting last fall on the league’s shift in testing procedures for asymptomatic vaccinated players, and a feature last fall on how the NFL finds international players. We look forward to seeing what NFL coverage she’s involved with at The Ringer.