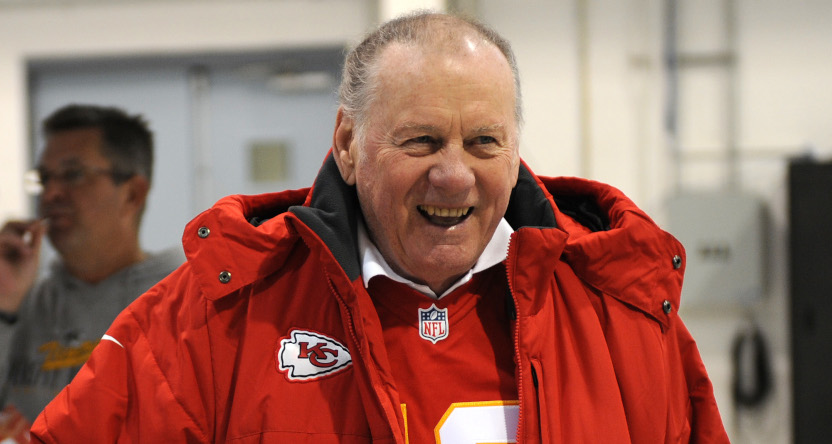 Earlier this month, news came out that famed former NFL player and broadcaster Len Dawson, 87, had entered hospice care. Now, Dawson has passed away. Kansas City ABC affiliate KMBC, where Dawson worked as sports director for more than four decades (starting in 1966 while he was still playing for the Chiefs), tweeted a tribute to him Wednesday morning:

Dawson played college football with the Purdue Boilermakers, then was chosen in the first round of the NFL draft by the Pittsburgh Steelers in 1957. He played for them for three seasons, then was tradedto the Cleveland Browns, where he spent two years. After the Browns released him in 1961, he went to the American Football League, signing with the Dallas Texans in 1962 and leading the league in touchdowns and yards per attempt. The team moved to Kansas City as the Chiefs in 1963, and he would play for them through 1975, leading them to a Super Bowl IV title in January 1970 and earning Super Bowl MVP honors. That was the last game ever played by an AFL team, as the AFL-NFL merger took effect later that year.

Dawson worked nationally for NBC from 1977-82, and he was a key figure on Inside The NFL during its run at HBO, appearing on that show beginning in 1978 and co-hosting it with Nick Buoniconti from 1979 to 2001. Dawson was also the Chiefs’ radio analyst from 1985-2017, and they named their television broadcast booth in honor of him that latter year. Chiefs’ owner Clark Hunt had a notable statement on his passing Wednesday:

“My family and I are heartbroken. Len Dawson is synonymous with the Kansas City Chiefs. Len embraced and came to embody Kansas City and the people that call it home. You would be hard-pressed to find a player who had a bigger impact in shaping the organization as we know it today than Len Dawson did,” Chiefs Chairman and CEO Clark Hunt said. “I admired Len my entire life – first as a Hall of Fame player on the field, and later as he transitioned into a successful broadcasting career. Throughout his remarkable career, Len made it a priority to give back to the community that he loved. The franchise has lost a true legend. Our thoughts and prayers go out to Linda and his family.”

There are many who have fond memories of Dawson, as a player and broadcaster. Here are some of the tributes to him on Twitter Wednesday:

As a player, Len Dawson was a Super Bowl winner & Hall of Famer. For his work in TV, he received the Pete Rozelle Radio-Television Award.

At his core, Dawson was the ninth of 11 children in a loving Ohio family, whose impact on the many lives he touched will never be forgotten. pic.twitter.com/ROLan8MUrD

R.I.P. to a gracious gentleman. A broadcasting icon. And the greatest quarterback in AFL history.

Patrick Mahomes in '18: "Mr. Dawson is the backbone of this organizatioan. He brought a Super Bowl. To try and carry on that tradition, hopefully bring a Super Bowl to #ChiefsKingdom, is something I'll strive to do."
Len Dawson: "We'll hold you to that."@KCTV5 Courtesy: Chiefs pic.twitter.com/tGxvLtBCes

RIP to the legend Len Dawson. The legacy and impact you made on Kansas City will live on forever. Prayers to his family ???? pic.twitter.com/AKMhxoUFYH

One of the first things I heard when I signed with the #Chiefs is you have to meet Len Dawson. After meeting Mr Dawson I knew why it was so important very kind always had a smile on his face at the games & was always willing to lend his time to help others ?? #ChiefsKingdom pic.twitter.com/H10aclH7OC

RIP to Len Dawson, a former AFL MVP quarterback, NFL Man of the Year and subject of the greatest Super Bowl photo of all time. pic.twitter.com/DlMj6iaGPB

Interestingly, as Kevin Clark of The Ringer noted, that famed photo of Dawson smoking at halftime during Super Bowl I never actually ran in Life, the magazine it was shot for. Here’s what Clark wrote on that in January 2020:

You could not, Bill Ray told me last season, make an image like this up. He was a photographer at Super Bowl I, on assignment after an editor at Life magazine made a deal with Chiefs coach Hank Stram to photograph his team and run the pictures if they won. “‘Who knows?’” Ray thought to himself. “It all seemed kind of historic.” In the locker room at halftime, he noticed something he’d never seen before. “It seems impossible now. People smoked all the time, and it was amazing that the star quarterback was doing it.”

The quarterback was Chiefs legend Len Dawson. It was 1967. Ray said the key in these situations is to be quiet and unobstructive, so the subject doesn’t move. Dawson’s pose was perfect. Cigarette in his right hand, Fresca bottle under his chair. “I just grabbed the camera,” said Ray, who died this month at age 84. The iconic photo never ran in Life. The Chiefs lost the game to the Packers, and the photo was relegated to the archives.

It wasn’t until the internet rediscovered it as part of a Time slideshow six years ago that people even started talking about it, Ray said. Now it gets recirculated on a near-daily basis on social media. Ray’s image of Dawson joined photographs of Marilyn Monroe at Madison Square Garden and President Eisenhower with General Curtis LeMay as some of his most notable works, he said. He was always drawn to major figures, and Dawson was major.

Indeed he was. And he’ll be missed by many.