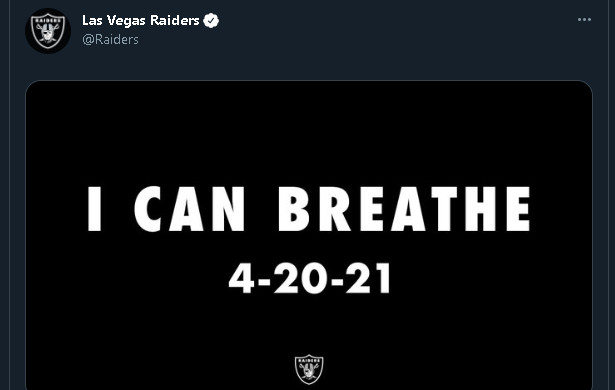 Plenty of teams and leagues from around the sports world put out statements following the guilty verdicts of second-degree murder, third-degree murder and manslaughter against former Minneapolis police officer Derek Chauvin, who knelt on George Floyd’s neck for more than nine minutes last year. Most of those statements were notable for their existence, but not really for their content; most were variations on a theme of expressing support for the Black community and vowing to continue working to support that community. The Las Vegas Raiders, however, went with an “I can breathe” graphic, and that drew a lot of criticism. Here’s that tweet, which they pinned to the top of their profile for more than an hour:

As of 8:50 p.m. ET, that tweet had received more than 41,300 quote tweets to only 2,763 retweets and 11,900 likes, producing quite the ratio. (Yes, the ratio concept was initially about replies rather than quote tweets, but Twitter’s changed what they show under tweets since then.) Here are some of the many criticisms it took:

I work in crisis mgmt. There’s no good response other than: “we really effed up.” Whatever you do, don’t blame an employee or explain what you intended to say. Here’s your plan, free of charge:

3. Educate yourselves. Do better.

The “I Can Breathe” slogan here drew criticism on a few levels. For one, one of the last things Floyd said before he died was “I can’t breathe,” and this appears to be a direct reference to that. Yes, Chauvin has now been found guilty on murder and manslaughter charges, but that doesn’t bring Floyd back, and it doesn’t mean that the issue of police violence against minorities has been solved; there have been several police shootings just this week, including a shooting of a 15-year-old girl in Columbus Tuesday. And there are still a lot of people who don’t feel safe interacting with police regardless of the Chauvin verdict.

Beyond that, there have been cases of people wearing “I Can Breathe” shirts seemingly in support of police actions. No, the photos that circulated last summer after Floyd’s death weren’t current (as per Snopes), but they did involve pro-NYPD protesters wearing those shirts at a December 2014 demonstration following the death of Eric Gardner, who died in July 2014 after police officer Daniel Pantaleo placed him in a chokehold, and whose final words were “I can’t breathe.” “I can’t breathe” became a slogan for many protestors after that, and “I can breathe” became a slogan for some of those opposing them,  so even if that wasn’t the Raiders’ intention here, their tweet brought some of that baggage with it.

Exactly what statement the Raiders should have put out, or even if they should have put out a statement at all, can be debated. But it seems pretty clear that their “I Can Breathe” tweet didn’t bring them the response they were looking for. Instead, it wound up being one of the most-heavily quote-tweeted tweets out there. We’ll see if they wind up taking it down.

Update:  Raiders’ owner Mark Davis said they drew their language here from a comment from Floyd’s brother. Davis also said they won’t take down the tweet.

#Raiders owner Mark Davis said the "I Can Breathe" wording came from George Floyd's brother Philonise, who said "Today, we are able to breathe again."

Davis added: "If I offended the family, then I'm deeply, deeply disappointed."

But Davis added that he wasn’t aware of the connection to the slogan used at pro-police protests after Garner’s death:

More from Davis: "Let me say this right off the bat: I was not aware of that. Absolutely not. I had no idea of that. That's a situation that I was not aware of. I can see where there could be some negativity towards what I said based on that."

Davis: "I wasn't watching the talking heads; I was listening to the family. And I was trying to take my lead from them. But if that's (the "I Can Breath" t-shirts) are what the cops are wearing then, really, it is a bad statement."