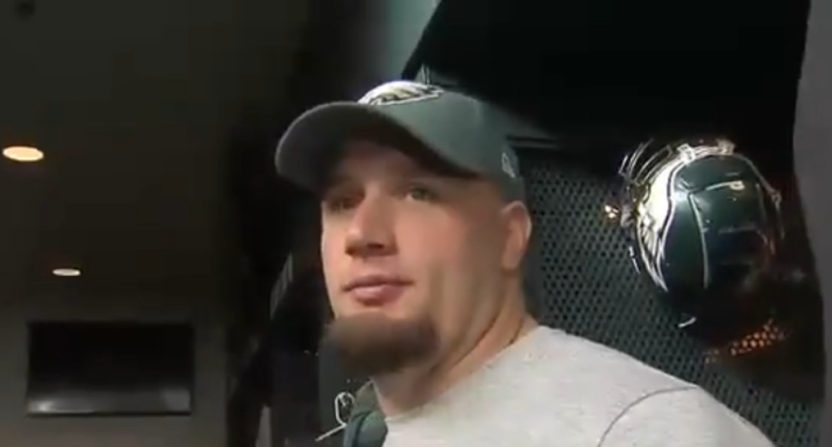 There have been plenty of NFL players upset with the media over the years, but fewer who have decided to boycott the media entirely.

Philadelphia Eagles Pro Bowl tackle Lane Johnson is the latest to take that stance, though, telling media members Wednesday “I’m not talking to you. I think I’m done. Maybe [for the] rest of my career.”

It’s unclear exactly what Johnson is upset about. After the Eagles’ 19-10 win over the Oakland Raiders Monday night, he described their offensive performance as “shitty from the get go,” and complained about penalties called against him, saying “I think (the holding calls) were ticky-tacky [BS]…You can put that in the papers.”

He did praise his own efforts despite the three penalties against him, saying Raiders’ pass rusher Khalil Mack “didn’t sniff the quarterback all night…he’s supposed to be the best player in the league.” He did also seemingly contradict himself, saying “We won the game. That’s all that matters,” but criticizing the Eagles’ play as well.

Maybe Johnson was unhappy with how he was quoted or portrayed in some of these accounts, but nothing in particular seems to jump out. However, Philadelphia Daily News reporter Les Bowen theorized it was about the comments on Mack and the holding calls, which may lead to a fine from the league:

This is bizarre. Lane Johnson just told reporters who approached him “I’m done talking for the year.” And as he walked away added “maybe for the rest of my career”. Anyone know what we did? #Eagles @6abc pic.twitter.com/sCiCZrkhl3

Just hazarding a guess, I'd say we're being blamed for remarks he made after the game about holding calls and Khalil Mack, and how he didn't care if he got fined. The ones that he told us to "put in the paper." How dare we actually do that! But it's Lane; he's not gonna stay mad. https://t.co/KJCSLeXvLn

This isn’t the first time Johnson’s been somewhat combative with the media. He told Fox’s Nick Wright last month that “we’ll just keep proving you wrong” when it comes to Eagles’ doubters, and he’s made plenty of other strong comments. But it’s interesting to see him elevate that to an actual boycott. And he can certainly do that. While the league rules state players must be available to media at least once a week, they don’t necessarily have to say anything. (See the Marshawn Lynch strategy.)

Johnson has long been one of the more outspoken, candid and interesting Eagles’ players, though, so it would be unfortunate for both reporters and fans if he does continue this boycott. We’ll see where it goes from here.