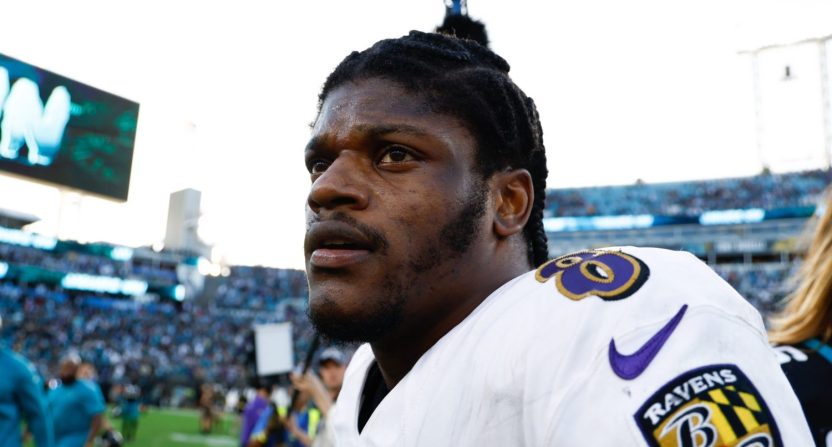 Following Baltimore’s loss to the Jacksonville Jaguars on Sunday, Jackson (seen above during that game) responded to a critical fan on Twitter with a seemingly excessive and vulgar response. The fan suggested the Ravens should let Jackson walk in free agency rather than pay him the $250 million guaranteed the quarterback is reportedly seeking.

“Boy STFU y’all be cappin too much on this app,” Jackson tweeted in response. “mf never smelt a football field never did s— but eat d–k‼️” (edited for profanity).

ESPN Ravens reporter Jamison Hensley wrote an article for ESPN.com in which he claimed the “profanity-laced tweet…included an anti-gay phrase.” When the ESPN story was published, it did not include context as to what the “anti-gay phrase” may have been.

After seeing the story, Jackson fired back at the ESPN reporter on Twitter for interpreting the deleted tweet as having an anti-gay phrase. “This is Defamation of my character,” Jackson wrote to Hensley on Twitter. “Because not once have I ever mentioned or disrespect anyone’s Sexuality, sexual orientation, gender, Religion or Race. Your reaching.”

@jamisonhensley This is Defamation of my character, Because not once have I ever mentioned or disrespect anyone’s Sexuality, sexual orientation, gender, Religion or Race. Your reaching…

Hensley was not alone in his assessment that the tweet included an “anti-gay phrase.” Monday morning on First Take, show moderator Molly Qerim introduced a segment by saying “Lamar replied with a profanity-laced tweet that included an anti-gay phrase.” On Undisputed, Skip Bayless alleged “Some, if not many, in the gay community are not gonna be real pleased with what he tweeted.”

Jackson did not threaten to take legal action to prove Hensley’s interpretation was defamation. And while defamation would certainly be hard for Jackson to prove here, ESPN could have provided more context to the alleged “anti-gay phrase” in their original story.

I’m not too comfortable in breaking down the phrase, but it’s clear Jackson used the term “eat d*ck” as an insult. Jackson may not have intended to use discriminatory language in his reply, but if he deems the phrase insulting because he considers the act to be degrading to men, then you can see how some may interpret the tweet as having anti-gay language.