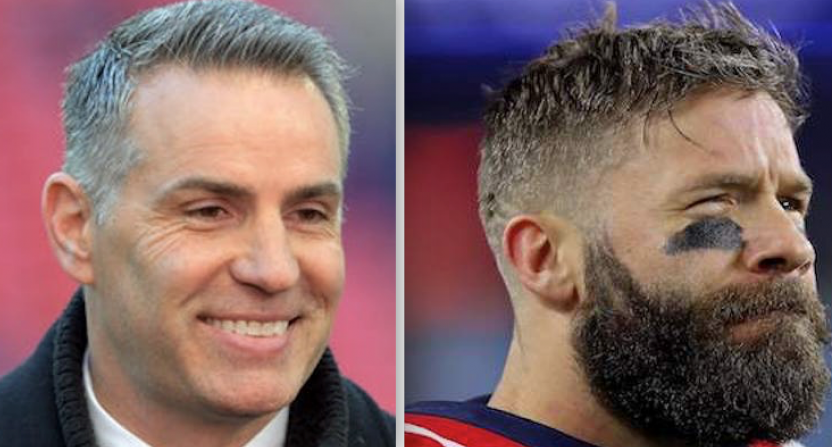 Rich Eisen apparently wasn’t the only NFL Network broadcaster who got tough criticism from viewers on Saturday.

No, Kurt Warner didn’t have difficulty getting his Watsons and Winstons right. And given what we know about Warner and his beliefs, he’s certainly not going to suggest viewers play a drinking game with his on-air mistakes.

But the Hall of Famer received plenty of pushback during Week 16’s broadcast of the Bills-Patriots game for saying that a third-quarter play involving New England receiver Julian Edelman interfering with Buffalo defensive back Jordan Poyer was called incorrectly by the referees.

Here’s the play in question:

Julian Edelman with a blatant pick play, then acts dead when hit.

Edelman was called for offensive pass interference, essentially running an illegal pick play that prevented Poyer from getting to Patriots tight end Benjamin Watson, who caught a pass from Tom Brady that went for a touchdown. Furthermore, Edelman also acted as if he was injured (and admitted doing so in postgame remarks), knocked unconscious from the collision with Poyer, perhaps attempting to dissuade referees from throwing a flag.

Watson’s score was wiped out by the penalty. But Warner said he thought the wrong call was made, that Edelman didn’t run an illegal pick on Poyer. That analysis sent the Twitter hounds after Warner.

*edelman runs a slant, lowers his head and puts it into the defender’s chest to help spring watson*

kurt warner: not sure that was a pick play

Let’s be clear because Kurt Warner is feeding a bunch of BS to the audience. Edelman has no intention of running a route here, his sole purpose is pick Poyer (and tries to sell it w/ a fake injury) and you can tell by Belichick reaction knowing he got caught. #BUFvsNE pic.twitter.com/OFu1S9eKbR

These days, many of us are often prone to think that a few tweets indicate a tidal wave of opinion when it might just be a very vocal minority. However, Warner was seeing enough disagreement with his analysis on Twitter during and after the game that he was compelled to respond.

Lots of love 4 saying Edelman wasn’t running pick play! All I’ll say is watch eyes of Edelman on play, then go watch eyes of every other pick play u see each Sun, when guys r looking 2 pick some1 they look @ guy they’re picking, when running route they look at guy covering them!

But Warner didn’t just leave it there. In addition to a brief defense explaining why he thought Edelman didn’t run a pick play and thus shouldn’t have been penalized, Warner came back on Monday with film of the play on his computer, a camera to record his analysis for Twitter followers, and a pen to point out the key figures involved and their assignments on the play.

Alright y’all – lots to say on Twitter about my call of this play in @Patriots @BuffaloBills game on Sat & why I don’t believe @Edelman11 was attempting to pick defender here… take a look & send me your expert thoughts per usual!! pic.twitter.com/hX7SBblphB

The “grief” he received appears to have gotten under Warner’s skin a bit, judging from the “expert thoughts” swipe at the end of that tweet and his sarcastic “lots of love” in his previous post.

Fans may still disagree with Warner’s take on the play (especially if they’re predisposed to think that the Patriots often cheat and Edelman frequently runs pick routes), and the end result looks bad with Poyer knocked to the turf by Edelman. But Warner’s explanation that this is more of a “natural rub” in which Edelman’s route happens to impede a defender seems valid when you watch where Poyer lined up and didn’t know if he would drop back or pursue the play.

Sure, Edelman knew that Watson’s route would lead behind him. And maybe he knew from film study how Poyer was likely to react to either Edelman running a slant or Watson flaring out wide. It’s also possible that Edelman has learned (or has been coached) not to look right at the defender he’s supposed to pick, which is Warner’s explanation for why Edelman couldn’t have been running a deliberate pick route.

Yet Warner probably gets the benefit of the doubt here, doesn’t he? He’s likely watched more film of NFL offenses than any fan in his role as a studio and game analyst for NFL Network. Of course, Warner also watched hours upon hours of film during his 12 seasons as an NFL quarterback. During his career, he led some of the most creative offenses in recent league history with the St. Louis Rams and Arizona Cardinals. And those schemes surely involved many pick plays or natural rubs.

Give Warner credit for not flashing those credentials back at his critics, though. He could’ve responded with a “Hey, I think I know more about football than you” kind of comment. Instead, he tried to educate the viewer on what he saw in the play and how his experience informed him about what was taking place.

But maybe he can hold his camera sideways in landscape mode, rather than upright in portrait mode, next time? If you want to criticize Warner for anything, point that out!