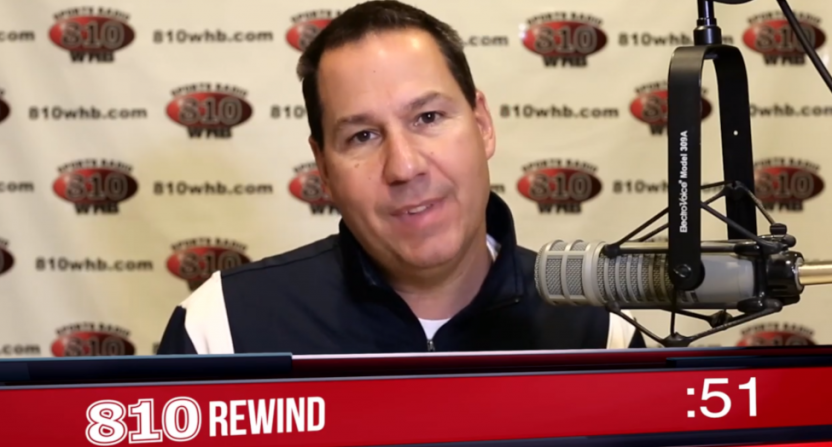 That explanation didn’t stop the tide of criticism for Kietzman, though, and it didn’t mean that there were no repercussions. His station put out a statement Tuesday morning that “We have decided to take the immediate step to take Kevin off the air until further notice as we review this matter.” Kietzman himself has now offered an apology:

“I want to begin by sincerely apologizing to coach Andy Reid and his entire family for my comments yesterday. What I said has been interpreted by many as hurtful, insensitive and cold. And in hearing from listeners and relistening to what I said, I can understand why. I can finally find the words to even say out loud what some people believe I was trying to convey.”

“I never mentioned and would never, ever suggest that Coach Reid was at fault for his son’s tragic death, or that any parent would be at fault for such an unspeakable tragedy. As a father myself, I cannot imagine the pain of burying a child. Please know that this was not my intention and that it was not even on my mind when I made the comments I did. And if Coach Reid or any listener interpreted it that way, I again apologize.”

“My beliefs on the team’s personnel history are absolutely trivial when it comes to actually hurting somebody with my poorly-chosen words. I am deeply sorry that I offended so many people, but mostly, I’m sorry if I hurt Coach Reid, a man I respect greatly. He deserves better than to have something like this happen that brings up terrible memories.”

“I’ve spent a great deal of time and resources over the past several years working with organizations trying to curb the epidemic of teen suicide. I personally know several parents that have lost a child to suicide or heartbreaking accidents. Losing a child will always be my worst nightmare, and I feel truly blessed every day that one of my own children survived a horrible car accident.”

“The absolute worst thing I could ever say on the air would be to blame a fellow parent for a tragedy they could not possibly prevent. People who know me know this, they know my heart. For those who do not, I can’t change what you think of me today, but I can again say that I’m sorry for my comments and pledge to be more considerate choosing my words when going forward.”

“This is on me. I’m paid as a broadcaster to be concise in what I say. My words on Monday’s show left open way too many interpretations and I’m the only person responsible for that, and the only person to blame. I’ll learn from this mistake and I’ll work hard to do better, and I hope to one day regain the trust of Coach Reid and the Chiefs’ organization.”

“I tried to contact Coach Reid this morning to speak to him, father to father, and personally apologize for any pain I may have caused him or his family. I’m told he’s unavailable today and I understand. I hope he will accept my apology, but I understand if I am not completely forgiven.”

“I hope to be back soon, and I thank my friends, family, listeners, sponsors, coworkers and partners that have reached out to support me.”

That’s a rather different tack from what Kietzman tweeted Monday night:

Holy hat what’s going on here? I never mentioned one word about the tragic death of Andy Reid’s son and quickly corrected a caller who did. I was talking about the owner’s record of “fixing” players, the team’s record and Andy’s record. I was referencing the drug (1/3)

addiction and convictions for dealing drugs. When they served time and Reid hired them to work for his football teams, it was no longer a private matter. But blaming a parent for the death of their child in these circumstances is unthinkable and reprehensible. Period. It (2/3)

was NEVER mentioned or discussed and NEVER entered my mind. It makes me sad that somehow that’s what some of you thought I was saying. That would be despicable. (3/3)

Or what he said to AA by e-mail then:

[From the second e-mail:]

As detailed here, that partial apology stands in its full form. Our initial piece was too declarative that Kietzman was referencing Garrett Reid’s death, which he says he wasn’t, and we’re not in his head examining his motivation. But we certainly weren’t the only listener or outlet to make that connection, and our criticism of Kietzman’s comments (and in particular, of “It did not work out particularly well in his family life”) stands. He’s now apologized for those, and we’ll see if he winds up back on the air.