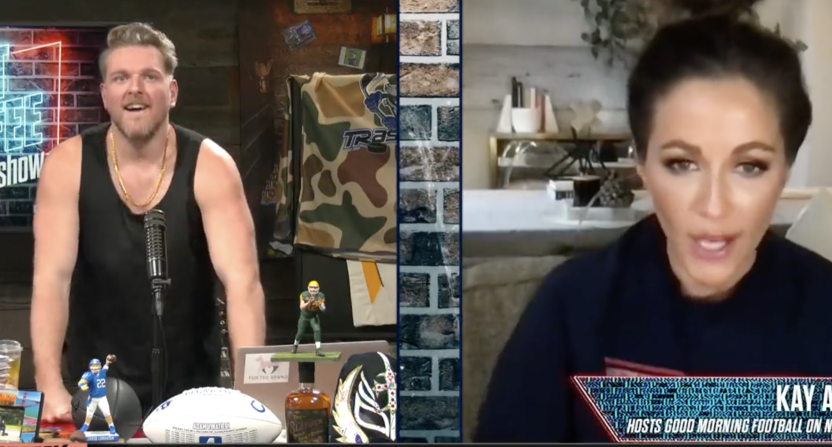 In the most recent edition of Morning Consult’s annual ranking of the National Football League’s “Most-Liked Skill Players,” Green Bay Packers quarterback Aaron Rodgers plummeted. While he ranked fourth overall amongst NFL skill players last year, Rodgers “has seen his net favorability rating decline precipitously — from 32 last season to 15 this season — due to controversy surrounding his vaccination status against COVID-19.”

You can trace a lot of that sentiment back to the many appearances that Rodgers has made on The Pat McAfee Show in the weeks following the revelation that he was not actually vaccinated after telling reporters he’d been “immunized” near the start of the season. Rodgers’ now-infamous appearance later that week set off a chain reaction that led to him getting skewered by NFL pundits and costing him at least one sponsor. While Rodgers would return to the program to admit he “misled” people, he would also return many other times and reiterate a lot of the same medical misinformation and “woke mob” rhetoric that led to a change in his public perception.

McAfee’s role in the discussion has been much debated. Since McAfee tends to let Rodgers run wild in these appearances and rarely pushes back on what the quarterback has to say about vaccines and alternative medicines, he’s been seen by some as a part of the problem. While McAfee claims that he’s no reporter and no one should have ever expected him to be, others would say that the size of his platform and the importance of the information being discussed during a pandemic require him to step up and meet the moment.

Right or wrong, Rodgers clearly feels comfortable talking things out on McAfee’s program, and only McAfee’s program. And that’s a problem for journalists out there who want to be able to question Aaron in real-time and engage in a dialogue, rather than just let him ramble. Good Morning Football co-host Kay Adams appeared on McAfee’s show on Tuesday and, somewhat jokingly, but also somewhat seriously, admonished McAfee for not leaving any Aaron Rodgers scraps for the rest of the football world.

"Congratulations you've ruined interviewing Aaron Rodgers.. you've really let us get to know his character & who he is as a human" ~@heykayadams

“See, I feel the other side,” said McAfee. “I feel like it’s been good. Because I don’t really interview, I just sit there and have a conversation.”

“Correct,” responded Adams. “So then I’m told ‘you get to sit down with Aaron Rodgers for seven-to-ten minutes’ and I go ‘oh, okay great.’ This happened last week. And I sit down and I’m like what questions do I want to ask him. And it’s impossible to even come up with anything to ask him he just comes on your show and he has these hour sessions of just stream of consciousness and there’s nothing, there’s literally nothing that he has not gone over with you. And so you’ve ruined the experience of networks interviewing Aaron. Congratulations.”

While Adams may or may not be genuinely peeved about the situation, she does praise McAfee for providing a forum so that people have been able to get to know the real Aaron Rodgers, for better or worse.

“He’s never been an open book, but you’ve really let us get to know his character,” said Adams, “and who he is as a human, his kindness, his vulnerability. It’s transcendental; seriously, it’s awesome.”

It would be easy to push back on that frustration by saying that Adams could literally ask Rodgers to repeat those same talking points and then offer up some rebuttals and questions in order to see how he responds. So we don’t necessarily agree with the notion that the “Aaron Rodgers interview” is ruined. If anything, McAfee has opened the door to see just how much there is to discuss with Rodgers who, if he were willing to discuss it in a more adversarial space, would make for fascinating television or podcasting.

Hopefully, someone, and Rodgers, will step up to do that interview one of these days.