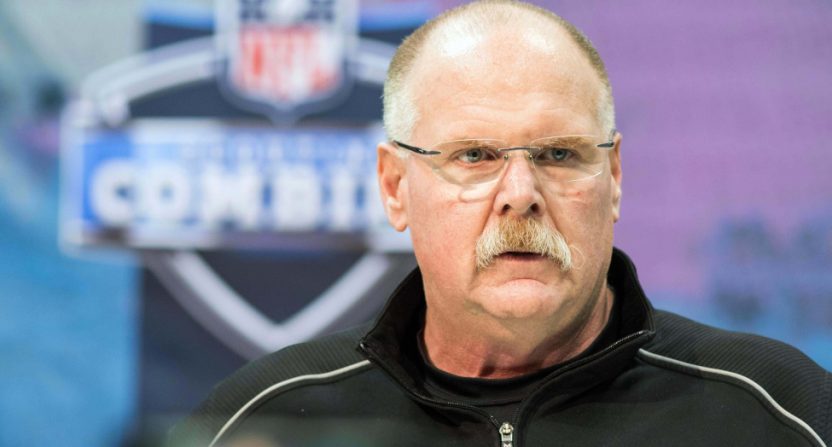 It generally seems like a bad idea to bring up a coach’s son’s death as proof of that coach’s failures, but that sure didn’t stop Kansas City’s Sports Radio 810 WHB host Kevin Kietzman from doing just that Monday. Chiefs’ head coach Andy Reid’s son Garrett died in 2012 from a heroin overdose, while Reid’s son Britt has also served time in prison on gun and drug charges. Somehow, Kietzman (who’s in his 20th year as the host of WHB mid-day show Between The Lines) managed to blame Reid for his sons’ issues, and also compare his alleged lack of discipline there to the Chiefs not yet cutting Tyreek Hill (who’s meeting with NFL investigators this week, something Kietzman broke the news of on WHB’s website) after a child abuse investigation.

Update, June 25: Kietzman has now been taken off the air by his station, and he’s issued an apology to Reid, Reid’s family and listeners. Our initial post from June 24 follows:

Update, June 24: Kietzman e-mailed Awful Announcing to say he didn’t mean to reference Garrett’s death, but rather the issues the Reid sons had, and added that he believes the Reid sons’ issues are fair game for comment given that they worked for the team. His full statement to AA is below. First, here’s audio of his comments from Boston radio station WEEI’s Off Day Podcast:

“The thing is, they probably think they can fix him, but they thought they could fix him before and they failed. Andy Reid does not have a great record of fixing players. He doesn’t. Discipline is not his thing. It did not work out particularly well in his family life, and that needs to be added to this, as we’re talking about the Chiefs. He wasn’t real great at that either. He’s had a lot of things go bad on him, family and players.”

Update, June 24: And here’s Kietzman’s e-mail comment in its entirety:

In a subsequent email, Kietzman said he had no intention of tying this to Garrett Reid’s death and that his charity work involves counseling parents who have gone through teen suicide and telling them they’re not to blame:

As we noted originally, talking about player issues with the Chiefs is one thing, including with Hill and with Hunt before him, but bringing Reid’s family into this feels like crossing a line, even if the reference to Garrett Reid’s death wasn’t intended. Kietzman’s argument about Reid hiring his sons makes it more understandable why he went this way, and his comment that he wasn’t thinking about Garrett Reid’s death makes his comments look a little better, but from the outside, saying “It did not work out particularly well in his family life” understandably brings up thoughts of the most significant Reid family issue.

And overall, this really doesn’t seem too connected to the Hill situation, which is still in flux with that NFL investigation and with a child services investigation still ongoing (although the criminal investigation is no longer active). If Kietzman wants to argue that the Chiefs should cut Hill, that’s fine. If he wants to bring up the Chiefs’ past with other players, fair enough. But connecting this to the issues of the Reid sons and to Andy Reid’s supposed lack of discipline in his personal and professional life still feels like a bold take.