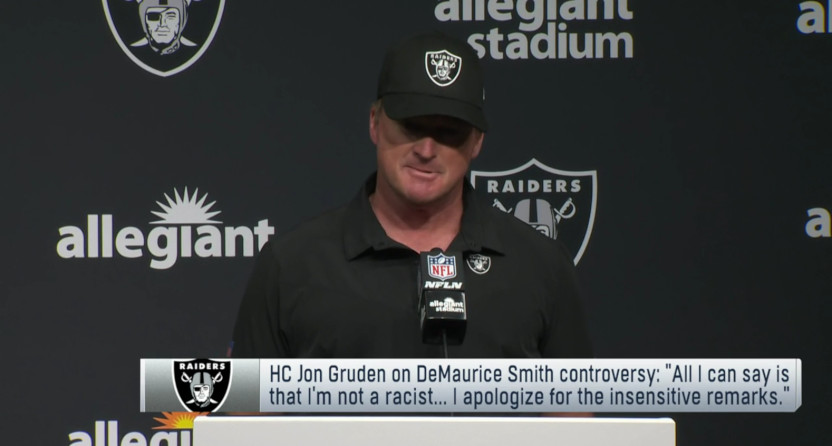 One of the stranger NFL stories in recent memory comes from Friday’s report from Andrew Beaton of The Wall Street Journal on how Las Vegas Raiders’ coach Jon Gruden sent an email full of racist stereotypes demeaning NFLPA executive director DeMaurice Smith in 2011 (while Gruden was an ESPN analyst). In particular, that email (from Gruden to then-Washington GM Bruce Allen) saw Gruden saying “Dumboriss Smith has lips the size of michellin tires,” and it led to Gruden claiming to the WSJ “I don’t have a racial bone in my body,” and to the team offering a “this is not what the Raiders stand for” statement from owner Mark Davis. Well, after the Raiders’ 20-9 home loss to the Chicago Bears Sunday, Gruden put out some further thoughts in a post-game press conference:

“All I can say is that I’m not a racist,” Gruden said following the Raiders’ 20-9 loss to the Chicago Bears. “I can’t tell you how sick I am. I apologize again to De Smith, but I feel good about who I am and what I’ve done my entire life. I apologize for the insensitive remarks. I had no racial intentions with those remarks at all. But… yes, they can… I’m not like that at all. I apologize but I don’t want to keep addressing it.”

…When asked if he expects something to happen, Gruden said: “I’m not going to answer all these questions today. I think I’ve addressed it already. I can’t remember a lot of the things that transpired 10 or 12 years ago, but I stand here in front of everybody apologizing. I don’t have an ounce of racism in me. I’m a guy that takes pride in leading people together, and I will continue to do that for the rest of my life. Again, I apologize to De Smith and anybody out there that I have offended.”

Raiders running back Josh Jacobs, who is Black, told reporters that Gruden addressed the team prior to The Journal’s report.

“He had a team meeting and laid everything out (on) how the situation had occurred and things like that,” Jacobs said. “I’ve been around this guy for three years now. I’ve never felt a certain type of way about him. He’s never rubbed me a certain way like that type of way. What he said was what he said at the end of the day, too. But I definitely trust him — It was 10 years ago – people grow.”

It’s certainly notable that many Black players on the Raiders (Jacobs is only one of many to speak out in similar terms here) are supporting Gruden so far. But at the same time, a head coach has a lot of power relative to players, so we can’t always expect players to fully speak their mind about their current coach. At any rate, it’s notable that Gruden is addressing this in more detail. We’ll see where it goes from here.