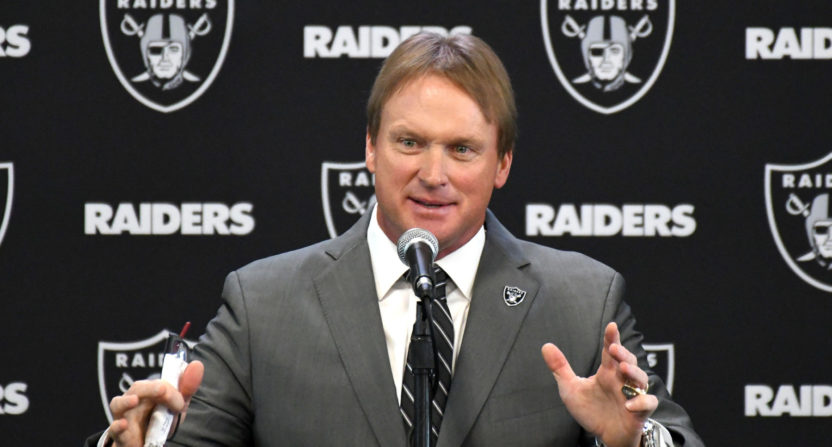 When the Oakland Raiders made Jon Gruden the highest paid coach in NFL history last month, many fans and analysts wondered whether the franchise had made a mistake in turning over its roster to a man whose last playoff victory came in February 2003. After all, the game has changed a lot since then, and if Gruden couldn’t coach a consistent winner in Tampa Bay 10 years ago, why should we expect him to do so in Oakland now, in a much-different league?

Well, Gruden didn’t exactly quiet those questions Wednesday when he stood in front of reporters at the NFL Scouting Combine and basically announced that he didn’t believe in any technological or statistical advancements of the past decade. Via the New York Post:

“There’s a stack of analytical data — or data, however you want to say that word — that people don’t even know how to read it,” Gruden told reporters Wednesday at the NFL Combine. “It’s one thing to have the data, or data. It’s another thing to know how to read the damn thing.

“So I’m not gonna rely on GPS’ and all the modern technology. I will certainly have some people that are professional that can help me from that regard, but I still think doing things the old-fashioned way is a good way. We’re going to try to lean that way a little bit.”

It seems Gruden is part of the large contingent of people in sports who think that information is bad. That knowing how often fourth-down attempts pay off is unhelpful. That understanding through wearable technology how players exert themselves is useless. That teaching athletes how to sleep in a way that maximizes their performance is silly. Generally, he seems to believe that if he isn’t smart enough to understand something it must be bad.

In a league full of teams seeking the smallest advantages wherever they can find them, that attitude will not serve him well.

It’s not exactly shocking that Gruden harbors retrograde views on technology in sports. He has spoken out vocally about practice limits in the collective bargaining agreement meant to make the game safer, and a recent (very good) Sports Illustrated profile painted him as yearning for the days when football was for men and yada yada yada. That is, in fact, the plot of a novel/movie/play he hopes to write, which will be called “The Football Gods” and will feature coaches of previous generations returning to the field to “fix” the game. Via SI:

“The state of the game? We have to put a GPS in Bobby’s shoulder pad to see if he’s working too hard,” Gruden sighs. “We stop a high school game in Florida three times every half to give ’em a water break. We run a zone-read every play in college—don’t even block the defensive end; we read him—because players can’t push themselves. It’s too risky; somebody had an episode six years ago. . . . Anyway, the Lord sees these gods and says, ‘We’ve got a problem with football. I need you guys to go back to earth and fix this.’ ”

Of course, it’s possible that Gruden will prove us wrong and excel by applying 1999 concepts to 2018 football and neglecting the information in front of him. But anti-intellectualism, in sports and in life, does not typically get you far.