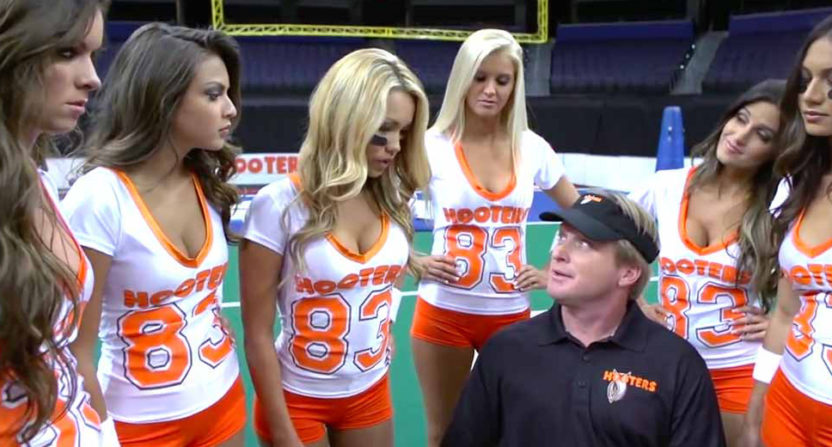 Another year means another set of rumors about Jon Gruden leaving ESPN to return to coaching, but this year, it sounds like there might be some fire to go with the smoke, especially if the Tampa Bay Buccaneers’ job becomes open. NFL Network’s Ian Rapoport reported Sunday that Gruden is calling assistants to see who might be able to join him, and that he ideally wants to return to the Buccaneers.

“Gruden right now is going through the process of reaching out to for former assistants and friends in the coaching industry just to see if they would be available, if they would potentially come with him if he were be able to get a head coaching job. And of course the Tampa Bay Buccaneers do have Dirk Koetter on the hot seat — that would be his preferred destination. The Bucs have often swung big. They’d have to give up a lot of money to outbid ESPN and pay Gruden what he would want — something that would be worth it to come back to coaching. As a source close to him told me, this year may actually be different.”

Gruden coached the Buccaneers from 2002-2008, winning the Super Bowl in his first season and posting a 57-55 overall record with the team, but was fired after missing the playoffs with a 9-7 mark in his final season. And it’s unclear how well he’d do in a NFL return, as he hasn’t coached in the league in almost a decade and has been at ESPN since 2009. But there are still plenty of teams interested in him, and Gruden himself seems perhaps more interested in leaving broadcasting than he has been in the past. Consider what he said this summer:

“I’ve met with several people – I won’t deny that,” Gruden said. “People – just about every year I talk about coming back to coach. I’m not in here every day at 4:30 or 4:00 in the morning watching pinball. You know? I’m preparing myself to come back. I am. Every day. I’m preparing to come back.

“It helps me in my broadcasting and I think if you lose that edge … you can’t come back unless you are totally wired with college football, personnel, schemes, the CBA, how people are practicing, trends, you know. You’ve got to stay on top of this stuff.”

We’ll see if all that preparation leads to an actual comeback, but it’s interesting to hear that Gruden’s reaching out to assistants, and that he’s particularly focused on Tampa Bay. The Buccaneers entered Sunday with a 4-10 record, and while they came close to a win against the 10-4 Carolina Panthers, they eventually lost 22-19 thanks to a final-minute touchdown drive from Cam Newton. That puts further pressure on Koetter, who went 9-7 in his debut season last year but has seen his team take a major step back this season. And if Tampa Bay is thinking they can bring back Gruden, that might add to the case to make a change.

Of course, it’s far from certain that Gruden will actually make the jump back to coaching. As mentioned above, we’ve heard a lot of these rumors before, and they’ve never come to anything. And part of the reason why is that Gruden is extremely well-compensated in his current role; his annual salary at ESPN has been estimated at $6.5 million, and while that’s not quite as much as the top NFL coaches get (that’s estimated at $8 million), it comes with more job security, plus the opportunity to make a lot from national endorsements. And the demands on him as a ESPN analyst aren’t nearly as extensive. So teams will have to make him a very good offer to get him out of that role.

It does sound like Gruden’s more interested than before in going back to coaching, and he may be ready for something else after almost a decade in the broadcast world, but he certainly doesn’t have to jump unless he gets something really good. We’ll see if the Bucs, or anyone else, can prove convincing enough. And we’ll see if he answers the Gruden Hotline.