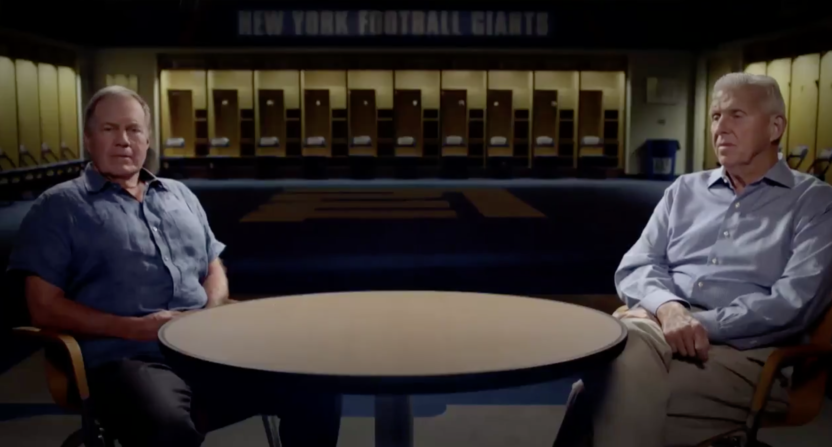 ESPN’s upcoming 30 for 30 documentary “The Two Bills” features one irresistible hook: longtime frenemies Bill Belichick and Bill Parcells in a room together conducting a joint interview.

According to Neil Best of Newsday, the two legendary coaches made producers work hard to secure the sit-down, which finally came to pass last spring.

“It took 2 ½, 3 years,” said Ken Rodgers, who directed the documentary and is coordinating producer at NFL Films, which produced it for ESPN’s “30 for 30” series.

There were some comical moments as the two played hide-and-seek with Rodgers, their schedules forever in conflict and with no apparent sense of urgency.

“Coach Parcells would call and say, ‘Hey, I’m in Saratoga. I’ve nothing going on tomorrow. How about tomorrow?’” Rodgers recalled. “But Coach Belichick had [Patriots] practice.”

Parcells and Belichick enjoyed a fruitful mentor-mentee relationship while Parcells coached the Giants, Patriots and Jets and Belichick served as his defensive coordinator, but things turned sour after Belichick’s infamous one-day stint as Parcells’ successor with the Jets. The two have since made amends, but you don’t get the sense they’re exactly best buddies.

Rodgers told Sports Illustrated’s Richard Deitsch that the interview between Belichick and Parcells felt like “a moment in history being recorded.”

“There was a feeling in the room, an unspoken knowledge that we were witnessing something that would never happen again, a moment in history being recorded, an official record of something so many people are interested about,” said Rodgers, an Emmy Award-winning producer of HBO’s “Hard Knocks” and the director of two ESPN “30 for 30” documentaries, “The Four Falls of Buffalo” (2015) and “Elway to Marino” (2013). “There was a palpable sense that they were working out their relationship themselves as the conversation went on. We worried as soon as the interview was over: How do we show what we were all feeling?”

“The Two Bills,” which will air at 9 p.m. Thursday on ESPN, seems to be earning strong reviews, and the timing worked out pretty perfectly with the Patriots appearing in the Super Bowl on Sunday. Though it was easy to wonder whether the film’s premiere date would depend on the Patriots’ success, Best reports that the documentary was scheduled to debut Thursday regardless of who won the AFC Championship.

The timing of the premiere is ideal, three days before Super Bowl LII. But what if the Jaguars had held onto their lead in the AFC Championship Game and ousted Belichick’s Patriots before the premiere date?

“It was decided well beforehand that it was going to be airing this week,” Rodgers said. “I think the Belichick legacy is so strong now that the interest would be there one way or the other . . . I think it’s great timing for the Belichick back story and to see more of the story rather than the Belichick they’re watching this week or this year.”

The Belichick-Parcells interview is reportedly their first joint sit-down since 1991.

"Is it a good start, getting two of the letters?"

"Is it a good start, getting two of the letters?"