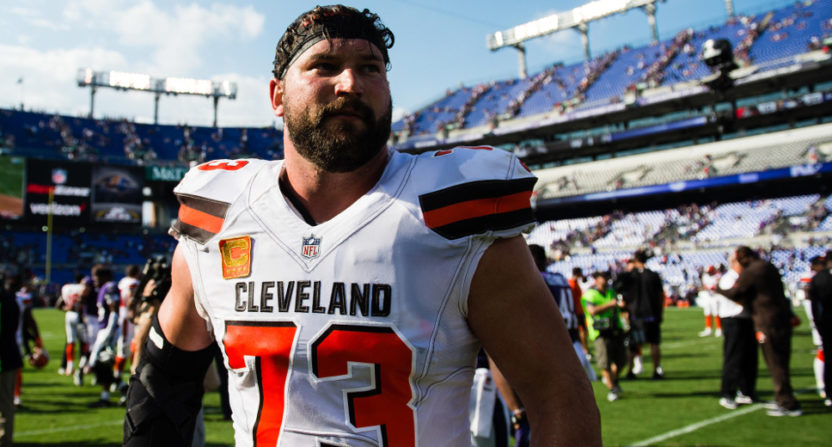 Plenty of NFL players go into the sports media after retirement, but given the large numbers of players interested and the limited numbers of jobs, it’s not always easy to predict who will land there. Joe Thomas seems like a pretty darn good bet, though. The long-time Cleveland Browns left tackle retired Wednesday after 11 seasons in the NFL, all with the Browns’ organization, and after 10 Pro Bowl nods and seven first team all-pro selections.

And while he’s already dipped his toes into the media waters, particularly with his ThomaHawk Show podcast on Uninterrupted (with former Browns’ teammate Andrew Hawkins) and with some guest appearances with Dan Le Batard (one of which involved quite the feud with Cleveland radio host Tony Rizzo), it looks like there might be much more in his future. Andrew Marchand of The New York Post wrote Wednesday that Thomas has already had successful auditions with both Fox and ESPN:

On Wednesday, future Hall of Famer Joe Thomas retired from the Browns. Thomas already has auditioned with Fox and ESPN this offseason, according to sources. Fox was left very impressed. Thomas’ studio work was said to be even more impressive than his game analysis, though both graded out well. Thomas could be an option for either.

Fox’s No. 2 team last year was going to be a three-man booth with Kevin Burkhardt, Charles Davis and Jay Cutler before Cutler un-retired. Fox added a second Sunday morning pregame show with “NFL Kickoff,” which could be another possible landing post, if he is not on the “Fox NFL Sunday” show.

…ESPN has yet to make it official, but Joe Tessitore is replacing Sean McDonough as the play-by-player. Thomas could be a wild-card choice for MNF; especially if ESPN went with a three-man booth with someone like Louis Riddick rounding it out.

Thomas could be a very interesting choice for a NFL booth or a studio show. For one thing, if he did join something like Fox NFL Sunday, he’d be the only former NFL offensive lineman currently on a main network pre-game show, and he has better offensive line credentials than anyone on any pre-game show. (Fox NFL Kickoff‘s Dave Wannstedt played offensive tackle in college and was drafted into the NFL, but spent his only playing season there on injured reserve, and is more known for his work as a college and NFL coach.)

And there aren’t many former NFL offensive linemen currently in NFL booths, either. The only current ones appear to be former Denver Broncos’ guard Mark Schlereth, who was on Fox’s fifth team this year, and former New York Giants’ guard and tackle David Diehl, who was on Fox’s seventh team. Offensive line play is a vital part of the game, but there aren’t too many former linemen featured on national NFL broadcasts or pre-game/halftime shows, so Thomas might be able to provide some different perspective and enhance the broadcasts for viewers.

That’s not to say that there aren’t any former offensive linemen in media roles. There are a few; a look at ESPN’s NFL Live “current” Wikipedia page alone includes five offensive linemen (Damien Woody, Jeff Saturday, Matt Light, Lomas Brown, and Mike Golic), and while Brown and Light actually both left ESPN a few years ago, Woody, Saturday, and Golic are all prominent there in one area or another. Schlereth also regularly appears on FS1 studio shows, while Diehl calls college games for CBS Sports Network. Plus, there are plenty of former offensive linemen doing local radio and TV. But there aren’t a ton on the most prominent national NFL broadcasts, and Thomas might change that.

Beyond that, though, there could be lots of other media opportunities for Thomas. On his podcast and in his appearances with Le Batard, he’s proven to have a pretty good sense of humor and be a pretty good conversationalist across subjects, and that could open some doors beyond just NFL commentary. The podcast’s helpful as a step into the new media world, too, and there are certainly lots of companies looking to do more in that space. So maybe Thomas will get expanded gigs during the week in addition to a prominent NFL broadcasting role; we’ll see. It seems like a pretty good bet we’ll soon be seeing more of him in some sort of media role, though.