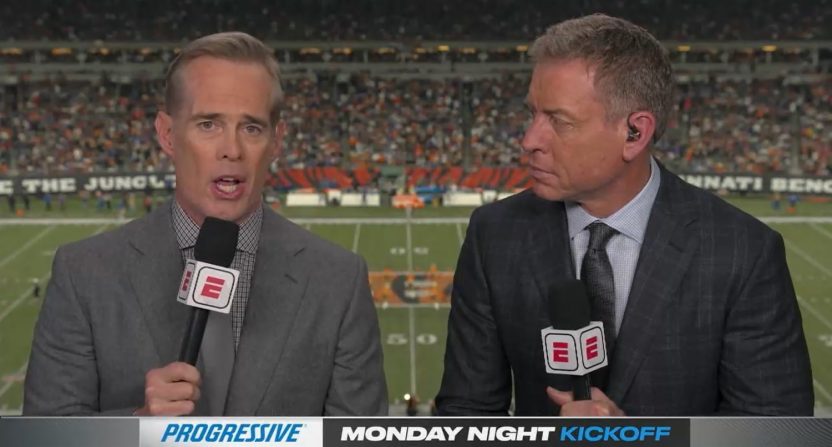 ESPN and Joe Buck stand by reporting the NFL initially sought to have the Cincinnati Bengals and Buffalo Bills resume play after Buffalo safety Damar Hamlin collapsed on the field.

The NFL eventually made the decision to suspend the game, a decision that from the start, seemed obvious to nearly everyone except for the league, and Skip Bayless. Fans and media were critical of the NFL as they delayed suspending the game despite the uncertain status of Hamlin, who remains in critical condition after going into cardiac arrest, needing to have his heartbeat restored on the field.

It appears the NFL delayed suspending the game because they wanted to complete it. On four separate occasions Monday night, Buck told the TV audience that both teams were informed they would receive five minutes to warm up before restarting the game. Then late Monday night, Troy Vincent, NFL executive vice president of football operations blasted the claim that the league wanted the game to continue.

“I’m not sure where that came from,” Vincent said. “Frankly, there was no time period for the players to get warmed up. Frankly, the only thing that we asked was that [referee] Shawn [Hochuli] communicate with both head coaches to make sure they had the proper time inside the locker room to discuss what they felt like was best. So I’m not sure where that came from. Five-minute warmup never crossed my mind, personally. And I was the one . . . that was communicating with the Commissioner. We never, frankly, it never crossed our mind to talk about warming up to resume play. That’s ridiculous. That’s insensitive. And that’s not a place that we should ever be in.”

The discourse has now created a bit of a rift between the NFL and one of its top TV partners, with the league claiming ‘we didn’t say that,’ and ESPN essentially saying ‘yes you did.’

On Tuesday, Andrew Marchand of The New York Post spoke to Buck, and the voice of Monday Night Football voice refused to back down from stating the NFL sought to restart the game, claiming the report came from ESPN rules expert John Parry who was in direct communication with the league.

“They said they’re going to give five minutes of a warm-up to these players to get ready,” Buck told Marchand.

Tuesday afternoon, ESPN issued a statement supporting Buck and pushing back on the league’s denial.

ESPN statement regarding the discussion about a five-minute warmup pic.twitter.com/jCCGH4Folw

“There was constant communication in real time between ESPN and league and game officials,” ESPN said. “As a result of that, we reported what we were told in the moment and immediately updated fans as new information was learned. This was an unprecedented, rapidly-evolving circumstance. All night long, we refrained from speculation.”

Not only did Parry relay the information to Buck, but he stated the NFL’s desire to resume play on ESPN’s airwaves, 21 minutes after Hamlin suffered the injury. “Just talked with New York in the command center,” Parry told Buck, Troy Aikman, and ESPN’s audience. “The situation has risen to a point where they want to give both teams an opportunity to go back into the locker room, regroup themselves, and so the game has been temporarily suspended.”

Here is what John Parry said: Just talked with New York in the command center. The situation has risen to a point where they want to give both teams an opportunity to go back into the locker room, regroup themselves, and so the game has been temporarily suspended. https://t.co/1T9z5VpDF2 pic.twitter.com/As5BKxLGpy

The NFL didn’t have a manual for how to handle a situation and a tragedy of this magnitude. It’s not outlandish to assume the league has protocols where if play is stopped for an extended period of time, both teams will be given five minutes to warm up before the game resumes. That information would have been relayed to Parry, who relayed it to Buck, who kept using it to fill time during a difficult situation on-air.

The NFL ultimately made the right decision in suspending the game. It may have taken them longer to arrive at that decision than most people would have liked, but they got there, eventually. And if the league initially sought to restart the game, kudos to them for not pushing the teams after recognizing no one was in the right mental state to continue playing a violent sport. But getting into a back-and-forth with Joe Buck and ESPN over the seemingly very sidebar issue is an odd play.