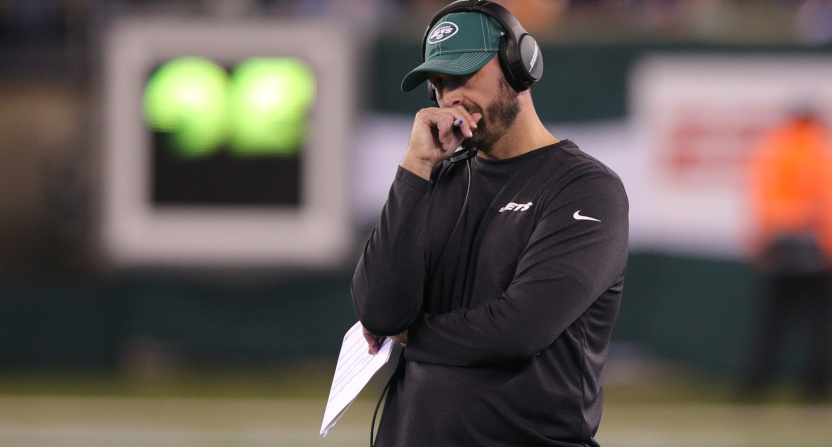 The New York Jets lost 33-0 to the New England Patriots Monday night and fell to 1-5 on the season, but afterwards, Jets’ head coach Adam Gase directed his ire at an unusual suspect: the game broadcast. ESPN had Jets’ quarterback Sam Darnold (who threw four picks on the night) mic’d up (through NFL Films), and at one point, they broadcast him on the sidelines saying “I’m seeing ghosts.” That’s a relatively common football phrase for being fooled by defensive coverages, and Darnold said afterwards it was about not seeing the field well, but it led to plenty of people cracking ghost jokes. And apparently that became a key priority for Gase afterwards, rather than, you know, all the obvious problems with his team. Barry Werner of USA Today‘s Touchdown Wire has more:

“I think we’ll look into that pretty hard,” Gase said. “That was one of those things that was really disappointing to hear about after the game. I don’t know if I’ve ever seen that where somebody that was mic’d up was basically … a comment like that was allowed to be aired. It bothers me. It bothers the organization. We’re looking hard into our cooperation going forward.

“… Obviously, you’re never anticipating something like that happening. The fact that it did just gives us pause to really cooperate anymore. I don’t know how we can allow our franchise quarterback to be put out there like that.”

On a lot of levels, that just seems ridiculous. There’s nothing objectionable here about what Darnold said, and even if some people interpreted it as him being scared or something, that doesn’t really feel like something to make you “look into that pretty hard” or be “looking hard into our cooperation going forward.” It shouldn’t exactly be revelatory to anyone that a quarterback who threw four picks (and who was just returning after a long absence thanks to mononucleosis) might have been having trouble reading defensive coverages. And what’s really interesting here is that, as Andrew Marchand of The New York Post reported Tuesday, this wasn’t about an ESPN decision, but rather a NFL Films one:

The way that it works when a player is mic’d up is that NFL Films has a representative listening in on site. That representative then gives the go-ahead to air a comment or to keep it off air. ESPN sometimes airs the comment without anyone from their network listening, trusting that the NFL Films representative has approved it.

The team is giving special access to their players and expects NFL Films to serve as a buffer to make sure nothing embarrassing or anything that would put a player in a bad light is aired. In this case, the Jets feel NFL Films did not do that. The “seeing ghosts” comment is going to stick to Darnold for a while.

“The NFL screwed Sammy over,” Le’Veon Bell tweeted. “There’s not one player in the NFL who’s cool with having every sideline convo broadcasted to millions…there’s a reason we’ve never heard other QB’s frustrated on the sideline like that before…that’s crazy, @NFL did Sam dirty as hell.”

But the comment itself really doesn’t seem all that bad, especially if you understand the football context involved (which, really, if Gase wanted to talk about this, that’s where it would have made more sense for him to focus). And it’s fascinating that this is what Gase chose to be particularly upset about after a contest where his team was so thoroughly demolished in every aspect of the game. Even SNY’s Bart Scott and Ray Lucas (both former Jets’ players) gave the team F grades across the board in their post-game report card segment, with the main positive they were able to cite being Lucas’ “We won the coin toss”:

So it feels like Gase maybe has a few more important things to deal with than the mic’d up “seeing ghosts” comment.