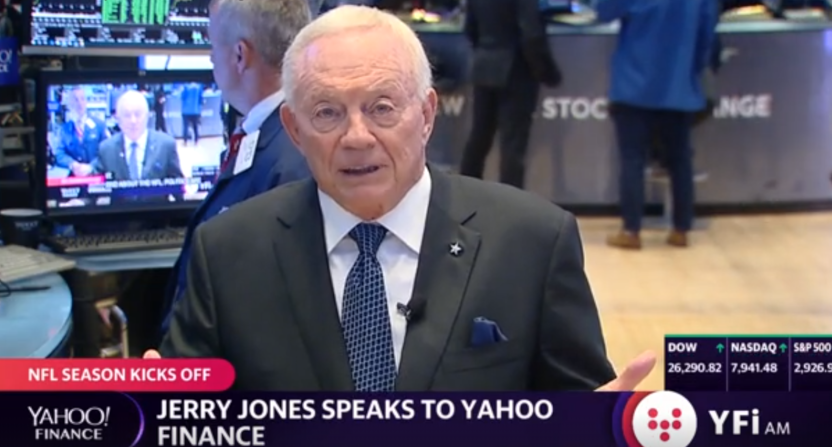 There’s no dispute that the increasing legalization of sports wagering has impacts on the sports TV world, with networks adding gambling–themed shows and receiving revenue increases (actual and projected) from gambling ads. There are also possible ratings benefits from sports gambling legalization; some studies have suggested people are more likely to watch and talk about (which can have a knock-on effect of getting others to tune in) a game if they have money on it, and while many of those who want to bet on sports were finding ways to do so even before the recent legal changes, the increased availability of legal wagering may well get some more people watching.

But while what that will actually translate into for leagues isn’t fully known yet, it feels pretty safe to say it won’t be the “up to 50 percent” boost in NFL TV rights Dallas Cowboys’ owner Jerry Jones discussed in an interview with Daniel Roberts and Kristin Myers of Yahoo Finance Wednesday morning (beginning at the 4:51 mark):

JERRY JONES to @YahooFinance on ZEKE: "I’d rather be answering why it went on too long before the first game—and got done—than to be sitting there in the third game not having it done. I may be almost $100 million lighter, but I’m happier." https://t.co/bGLmJ2o567

Roberts asks Jones “What do you make of the future outlook for legal sports betting and the NFL? Where do you stand?” and Jones responds with the following:

“Well, first of all, betting and wagering has been an integral part of the NFL for a long time just through individuals in various forms making their wagers, my town against your town. So it’s always been a part of it, it manifests in various ways, but it’s always to the benefit of the viewership. The viewership is where our numbers will increase, the viewership is where people will stay longer. And that value then is how our sport will benefit from gaming.”

“I know this, from the standpoint of fantasy football, it’s an integral part of the interest we have in the NFL. So gaming is going to make a big difference. I dare say that gaming will increase the value of television, of presenting our games, I dare say it will go up 50 percent because of the gaming concentration.”

Look, Jones is known for bold comments, and of course he’s going to talk up the value of his product. Anything he says about NFL TV rights should be taken with a grain of salt given that he has a vested interest in those rights generating a lot of money. But even with that, “I dare say it will go up 50 percent because of the gaming concentration” feels silly on a few levels.

We don’t yet have a full picture of what the new NFL TV deals will look like (the current ones expire in 2022) overall, but it’s possible they could wind up higher and maybe even as much as 50 percent higher, especially given all the networks rumored to be involved and especially if the league carves out some digital-exclusive packages for tech firms. There are also some negatives to consider, though, especially with last year’s Super Bowl bringing in the lowest average viewership since 2009 (even counting streaming) and only flat ad rates, with regular-season viewership still down from a few years ago (although up five percent from 2017), and with uncertainty over the future of the Sunday Ticket package. So while an across-the-board 50 percent rise for NFL rights seems perhaps possible, it’s far from certain. And what seems particularly certain is that even if there is a 50 percent rise, it’s not going to be all “because of the gaming concentration.”

Even Jones’ own remarks here help to disprove that numbers point. As he says, “betting and wagering has been an integral part of the NFL for a long time just through individuals in various forms making their wagers.” So it’s not like a switch suddenly flipped from “no betting on the NFL” to “betting on the NFL,” which is what you would probably need to see a rise as big as 50 percent singularly attributable to gambling. And it’s worth noting that we’re talking about massive sums of money here, making a jump like 50 percent even harder to attain; the NFL’s current network deals (with CBS, Fox, NBC and ESPN) bring in $39.6 billion across nine years, or an average of $4.4 billion per year. A 50 percent increase would take that to $6.6 billion yearly. And as aforementioned, while that’s not necessarily an inconceivable figure for NFL TV rights, if they get there, it won’t be solely thanks to legal wagering.

What is a more realistic assessment for the impact of legalized gambling on NFL TV rights? Well, Morgan Stanley media analyst Ben Swinburne projected last July that CBS could see a 1.5 percent increase in 2018 ad revenue from legalized gambling, and Fox’s new slimmed-down lineup of networks could see a 2.1 percent increase. Swinburne also projected that those percentages could rise to 3.1 and 4.1 percent respectively if gambling revenue rose faster. And his projections had overall U.S. sports betting revenues reaching $5 to $10 billion by 2025, and 20 percent of that spent on advertising.

But even if overall revenue hit $10 billion by 25, and if 20 percent of that was spent on advertising, that would be only $2 billion overall on advertising, which isn’t enough to make up that $2.2 billion jump in rights. And that $2 billion would not be all new (that’s overall, not increase), and would not all be spent on advertising on NFL games. And that’s under a very optimistic projection. So it seems more likely that the actual impact of gambling on NFL TV rights would be in the single digits percentage-wise, similar to the projections for how much it will affect networks’ ad revenues. It’s a factor, but it’s far from the only one. And while NFL TV rights might yet see the huge rise Jones is predicting here, that wouldn’t be solely because of gambling.