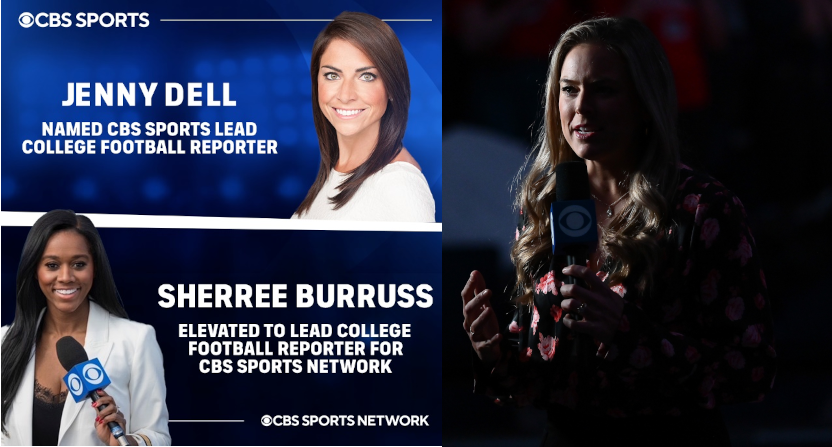 CBS Sports has named Jenny Dell lead college football reporter, teaming her with Brad Nessler and Gary Danielson to call the CBS Television Network’s top game each week, including the SEC ON CBS game of the week, beginning with the 2022 season.

Additionally, Sherree Burruss has been elevated to lead college football reporter for CBS Sports Network. Burruss will work throughout the season with Rich Waltz and Aaron Taylor. The announcements were made today by Harold Bryant, Executive Producer and Executive Vice President, Production, CBS Sports.

In addition to their college football reporting duties, both Dell and Burruss will continue in their anchor roles on CBS Sports HQ, the 24/7 streaming sports news service. In her new position, Burruss will also work select SEC ON CBS games throughout the year.

“Jenny and Sherree are talented, knowledgeable and respected reporters and we are excited to elevate their roles for our college football coverage,” said Bryant. “Since joining CBS Sports, they both have grown and excelled with every assignment. We are confident the passion and authenticity they have displayed will be evident to the new college football fans they will be reaching.”

Dell joined CBS in 2014 and had been the lead college football sideline reporter for CBSSN since 2015, also working selected sideline games for SEC on CBS and NFL on CBS broadcasts and working on CBS Sports HQ. She previously worked for ESPN and NESN. Her role here may be particularly interesting to watch going forward: that release spells out “the CBS Television Network’s top game each week,” but it’s unclear exactly what that game will be after CBS’ current SEC package heads to ABC and ESPN in 2024. CBS has some other current rights, including to the Mountain West (and they’ll show four Mountain West games on broadcast this fall), and they’ve been mentioned in the Big Ten talks, but there’s lots of uncertainty about what will happen there. So we’ll see what exactly they have for college football in 2024 and beyond.

Meanwhile, back on the personnel side, Burruss joined CBS in 2020. She had been working as a host and reporter for them across a variety of properties, including college football, college basketball, and the NFL. She previously worked for NBC 4 Washington and CBS 46 WGCL in Atlanta.

And as for Erdahl, she had been with CBS since 2014 following time at NESN. She took on the lead CBS sideline role in 2018 following Allie LaForce’s exit. NFLN’s release on the addition of Erdahl indicates that she’ll continue to work for CBS on select assignments. Here’s more from that release:

Erdahl (@JamieErdahl) joins NFL Network from CBS Sports, where she joined in 2014 and will continue to work for select assignments. During her eight years with CBS, Erdahl served as a sideline reporter for the NFL ON CBS, and most recently was the lead SEC ON CBS reporter. While at CBS Sports, Erdahl also served as a sideline reporter for the network’s coverage of the NCAA Division 1 Men’s Basketball Championship and regular season college basketball games, as well as an analyst for select women’s college basketball games on CBS Sports Network. Additionally, Erdahl hosted the network’s studio coverage of the NFL and college basketball, and was a major part of the CBS Sports HQ launch in 2018 appearing as an anchor for the 24/7 sports news outlet.

…”To be able to add a talent of Jamie’s caliber and experience to Good Morning Football is tremendously exciting for not only the show but NFL Network overall,” said Mark Quenzel, NFL Network Senior Vice President, Head of Content. “I have long been a fan of Jamie’s since her time at NESN, and throughout her career thus far she has earned a remarkable reputation throughout the industry. Jamie has consistently demonstrated a great knowledge of the NFL, the ability to be versatile and a quick wit, and we look forward to watching Good Morning Football continue to grow with her joining Peter, Kyle, Will and the rest of the team.”

We’ll see how these new roles work out for everyone involved.