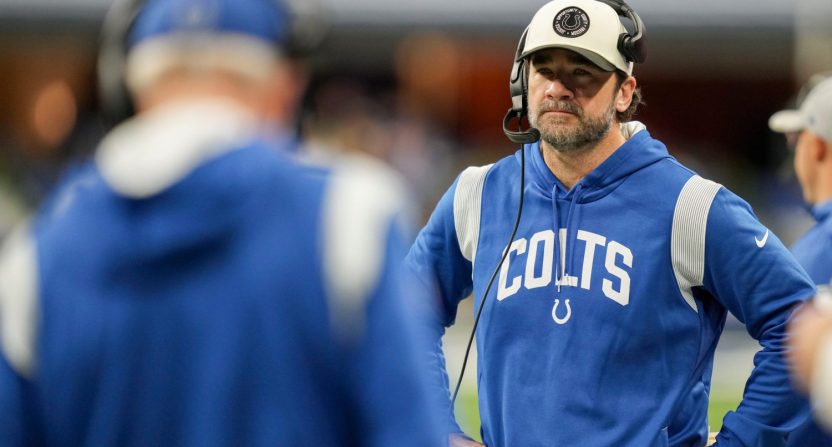 Jeff Saturday’s future as a NFL head coach remains murky at best. But it looks like he’ll at least have ESPN as a fallback.

The Indianapolis Colts controversially plucked Saturday from ESPN and handed him the title of interim head coach during the NFL season. Having never coached above the high school level, Saturday skipped the line and jumped over more worthy candidates to land the opportunity in Indy. And because he was given the interim tag, the Colts were able to bypass the Rooney Rule, which requires teams with head coaching vacancies to interview minority candidates.

After beginning his tenure with a win over the Las Vegas Raiders, Saturday proceeded to lead the Colts to seven straight losses, doing little to make a case for him remaining as their head coach next season. Saturday has been vocal in stating he wants the gig, but if that falls through, it likes like the former NFL center can return to his post as a studio analyst.

According to Richard Deitsch of The Athletic, an industry source believes ESPN has significant interest in a reunion with Saturday.

Saturday was a popular personality during his tenure with ESPN, regularly appearing on First Take, Get Up and SportsCenter. ESPN doesn’t seem to have been turned off by Saturday controversially taking the Colts job and digging the team into an even deeper hole by going 1-7 after being handed the tag of interim head coach.

A reunion with ESPN would be interesting. Stephen A. Smith, Ryan Clark, Domonique Foxworth, Mike Greenberg and other ESPN employees were always complimentary of Saturday’s character, but they also strongly criticized the decision by Colts owner Jim Irsay to hand their co-worker an interim head coaching tag with no experience.

Returning to ESPN means Saturday would now have to sit next to those same colleagues who questioned his credentials. Saturday returning to ESPN will also put a damper on Dan Orlovsky’s bid for a coaching job in the NFL.

If this is it for Saturday as a head coach in the NFL, his tenure will be remembered in the history books. Saturday oversaw Indy as they were embarrassingly outscored 33-0 during the fourth quarter of their matchup with the Dallas Cowboys, and followed that by blowing a 33-0 halftime lead to the Minnesota Vikings, the worst single game collapse in league history. The less-than-stellar resume might it a little ironic the next time Saturday calls out a coaching decision as an analyst.