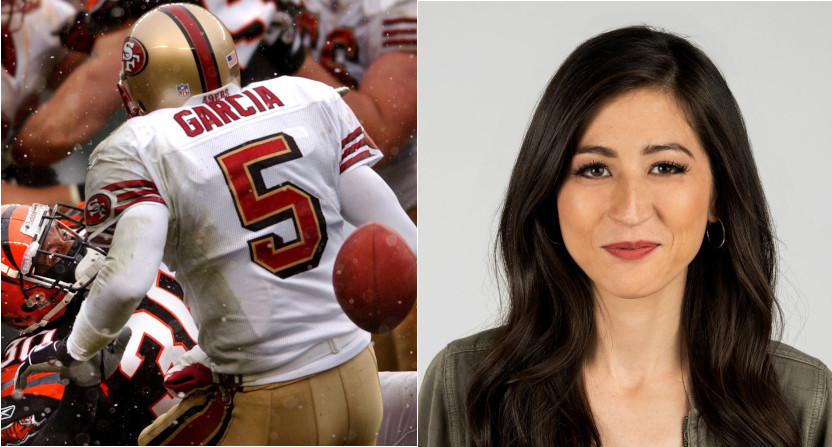 It’s been a banner week for the revival of the decades-old take that those who haven’t played a sport professionally shouldn’t evaluate it, with Chicago Cubs’ pitcher Marcus Stroman first bringing that up and former NFL and CFL quarterback Jeff Garcia now following suit. Following the San Francisco 49ers’ 13-10 playoff win over the Green Bay Packers Sunday, there was plenty of talk from many media members  about how 49ers quarterback Jimmy Garoppolo didn’t have a great game despite the win (he finished with 11 completions on 19 attempts for 131 yards with no touchdowns and an interception), but Garcia took particular exception only to those remarks from ESPN senior NFL analyst Mina Kimes, saying in a since-deleted Instagram post that she couldn’t criticize Garoppolo because she didn’t play in the NFL. Some quotes from that, via Ryan Glasspiegel of The New York Post:

“Who the hell is Mina Kimes and when is the last time she threw a touchdown pass in a game?” Garcia asked. “Never! Ever! has she taken a snap or can truly understand the ability, the mindset, the physical and mental toughness, that it takes to play the QB position or any position in the NFL.”

It’s funny that this is the kind of thing thrown out there when it’s Kimes talking, but that we rarely hear this specific line of argument from former players when the criticisms are coming from the likes of Stephen A. Smith or Skip Bayless. (Although, Bayless has claimed he was a high school basketball star.) It sure seems like there are a lot of people more willing to argue “haven’t played the game” when it comes to female media members than to male media members who weren’t notable athletes. And that’s unfortunate for the female media members who wind up taking this flak, but it also illustrates how poorly thought out this line of argument is. Many of the people arguing “haven’t played the game” praise takes from those who haven’t played the game, but then still throw this out when it comes to criticizing a different person they disagree with.

The stranger part of this argument still, though, is that there are all kinds of people without NFL playing backgrounds involved in evaluating the NFL. And that’s not just about the media; many of them are NFL general managers and other personnel executives. That’s illustrated in a nice dive that Hayden Winks did into NFL GMs’ backgrounds at NBC Sports Edge in April 2020. Some of the specific numbers will have changed since then with NFL front office turnover, but the larger point remains.

Approximately 80% of the current NFL general managers played at least some college football, but that does not mean they were stud players. In fact, only a handful of them played football at a Division I university, and only the 49ers’ John Lynch and the Broncos’ John Elway had serious NFL careers. This is more evidence that playing football at the highest level in the world and evaluating talent are two completely different skill sets. It’s definitely possible to climb the front office ladder as a non-athlete. In fact, it’s probable that we see more and more non-college athletes in GM positions over the next decade, especially if owners continue to put more eggs into the analytics basket.

So, that’s 20 percent of NFL GMs at that time who didn’t play college football at any level (and some of those who did play were at levels including Division III and the NAIA), and only 6.25 percent (Elway and Lynch, two out of 32) who were actually NFL stars for any length of time. Also, with Garcia’s qualification of “throwing a touchdown pass in a game,” that would even eliminate Lynch, a safety. But it’s long been clear that managing a professional sports franchise’s roster, or coaching a pro sports team, comes with a different skillset than just being a star player; many of the most successful coaches and general managers across sports have had limited to no playing experience, and some of the stars who have tried coaching or running teams have  not done well.

And the same holds true for media roles. There’s likely a higher percentage of former NFL players there than in front offices, especially when it comes to TV roles at places like ESPN (the vast majority of ESPN’s NFL analysts are former players). But that doesn’t mean the people without that playing past are somehow less capable of analyzing the game; there are good and bad analysts with high-level playing backgrounds, and good and bad analysts without those backgrounds. Breaking down a sport on TV comes with a much different skillset than playing it; just ask Jason Witten. And Kimes has a whole lot of experience breaking down the NFL, as that’s been a large part of her ESPN role since she joined that company in 2014.

And it’s notable that for all of his discussion of experience being necessary to criticize, Garcia (a former 49er himself from 1999-2003; he’s seen above in that final year) is doing the same thing. Yes, he had a notable career as a quarterback in the NFL and CFL, and he’s done a little coaching since and a lot of work developing individual passers, but he certainly doesn’t have much high-level broadcasting experience (at the least, none is listed on his Wikipedia page). But that hasn’t stopped him from weighing in on how Kimes should be doing her job on ESPN.

Part of what’s silly about all this is that this could have been a fair dispute if Garcia had stuck to substance rather than personal attacks based on background. Kimes’ initial comments on Garoppolo were opinion; they were supported by stats, such as his poor QBR and passing numbers, but they’re still opinion. If Garcia has some particular argument as to why Garoppolo’s game was better than it looked, that would be interesting to hear, and that argument could be made without going after Kimes for not playing in the NFL. (But even there, it wouldn’t be great for Garcia to single out Kimes over a narrative around Garoppolo that’s quite in line with what much of the world has been saying about him; a better argument would be “There’s been this media criticism of Garoppolo, but I think he did well Sunday for reasons X, Y, and Z.”)

But Garcia instead made it personal, and said that playing experience is necessary for media critics. That’s a flawed and antiquated notion. And the lack of NFL playing experience amongst the GMs actually making the decisions on who’s on a roster indicates how out of date it is.