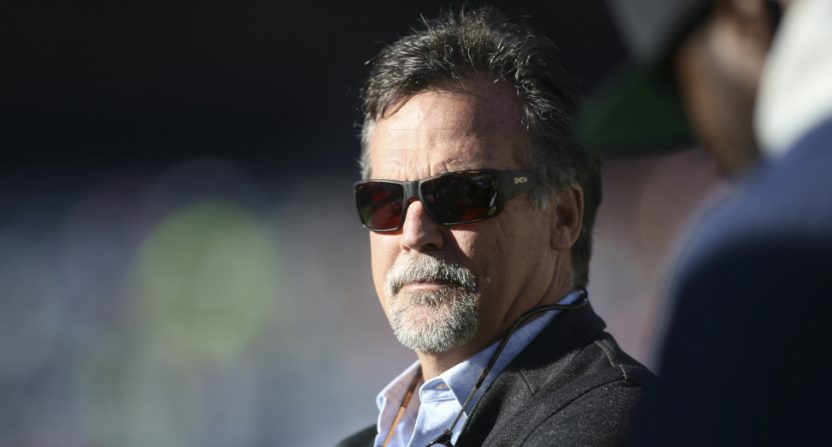 It’s not every day you see the subjected of a reported move dunk on that tweet with not only “false news,” but also “Maybe get better sources?” But that’s what former Tennessee Titans and St. Louis/Los Angeles Rams head coach Jeff Fisher (seen above watching a February AAF game between the Birmingham Iron and the Atlanta Legends) did Thursday. Jason La Canfora of CBS tweeted that Fisher was “in line” to coach the upcoming XFL team in Houston, and Fisher shot that down hard:

@JasonLaCanfora false news that I am headed to XFL Houston. Maybe get better sources? ? Have a great Thursday. pic.twitter.com/X3cCYJOGPu

The best part there may be the closing “Have a great Thursday.” Oh, and this wasn’t the only way Fisher shot this down. Sports Illustrated‘s Charlotte Wilder, who wrote a profile piece on Fisher in January (which had a lot to say about how he wanted to get back to the NFL, not alternative football leagues) showed her own skepticism of this tweet early on, and she then got more details from Fisher himself:

I’d be very surprised if this happened https://t.co/wWj6dCOoL6

And Fisher also confirmed to Paul Kuharsky that this was indeed him behind this tweet:

Waited to confirm this was real with Jeff. It it. And it’s glorious. Right @CBSSportsGang? https://t.co/tsDqZHdgDQ

La Canfora hasn’t said anything further on this since his initial tweet, instead retweeting comments about everything from the Arizona Cardinals to the AAF to MLS attendance numbers. Update: He weighed in hours late and defended his report.

Just to be super-duper clear, Jeff Fisher absolutely talked to XFL about the Houston opening, he remains their top choice for that job and the job is still vacant. And i never reported he signed on.

Meanwhile, The New York Post reported that on an unrelated front, La Canfora may not return to CBS’ The NFL Today this fall:

Sources have told The Post’s Andrew Marchand that there are questions if La Canfora will return to “The NFL Today,” CBS’s Sunday pregame show, this fall. CBS hasn’t ruled it out, and there have been talks between La Canfora’s agent and CBS, but sources say CBS has been looking around at other candidates, as well.

And while La Canfora took a while to address this, Fisher seemingly responded to most of those who weighed in, and did so with…a wide range of memes?

Credit to Fisher on switching up his meme sources. After all, if he’d only used WWE ones, that might have people thinking an XFL connection is in the works after all…