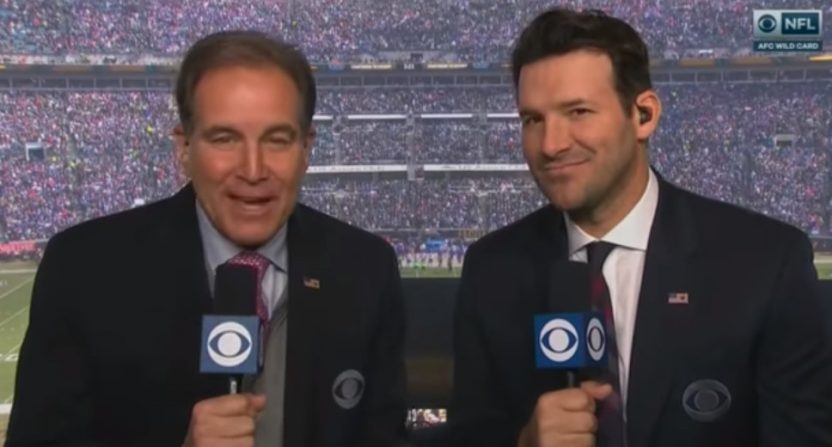 Former Washington Football Team head coach Jay Gruden has aspirations of ending up in a broadcasting booth or on an NFL studio show. And now that 2021 is the first time he’s found himself unemployed as an NFL coach since 2002, it sounds like he might be getting closer to making that transition happen.

Gruden spoke with Ben Standig of The Athletic on a wide range of topics, one of which was related to those aspirations and perhaps showcased the kind of candor and blunt commentary we could expect from him in that role. Specifically, when asked if he could pull a Tony Romo and predict plays before they happen, not only did Gruden scoff at the idea he couldn’t, he took a direct shot at Romo’s actually play-calling percentages.

“I could do it every time. He’s only right like 30 percent of the time. Those are usually pretty obvious, I mean. Nobody talks about the times when he’s wrong, but when he’s right, ‘Holy cow, he’s a genius.’ Oh, come on, man. Sure, it’s a run. Nope, it’s a pass. Sorry, I was wrong.”

Romo, who is calling Super Bowl LV on Sunday alongside Jim Nantz, made his mark early on in broadcasting with a propensity to predict the forthcoming play pre-snap. While audiences ate it up and it helped earn him a huge payday from CBS, some members of the media weren’t a big fan of the “gimmick.” And as PFT’s Mike Florio noted, Romo’s prognosticating abilities aren’t as rare as they seem, it’s just that many other analysts don’t say it out loud (or voice their displeasure with Romo doing it).

For his part, Romo recently told The Athletic’s Richard Deitsch that he’s been dialing back the predictions in general.

“I think I’ve probably done it less on purpose a little bit. I don’t consciously try and do it or not do it. I like to be able to do multiple things, and it goes back to what I think people at home want to feel or hear about their team. I’m telling them the truth about everything I see, and you’re not always going to say the right thing or do the right thing. But I do feel like I care and want them to enjoy their game. I take into account anything I do when something might be too much or too little. It’s just a feel. It’s just instinctual. You might be right in the sense that I probably have throttled that back a little bit. But there’s always a time I’ll bring it out, especially if it’s a fun time to do it.”

By the way, if you really want to get technical, a 2019 analysis of Romo’s predictions actually put him at around 70 percent correct. But who’s counting?

Parlor trick or not, the predictions are still a hit with many in the audience, so you can expect Romo to make at least a few on Sunday if the situation calls for it. As for Gruden, while he might feel good about “exposing” Romo, it’s generally seen as an unspoken rule for broadcasters and analysts not to call one another out publicly over how they do their jobs. So if that’s a club he’d like to join, he might not have put his best foot forward here.

But who can predict how these things can go?