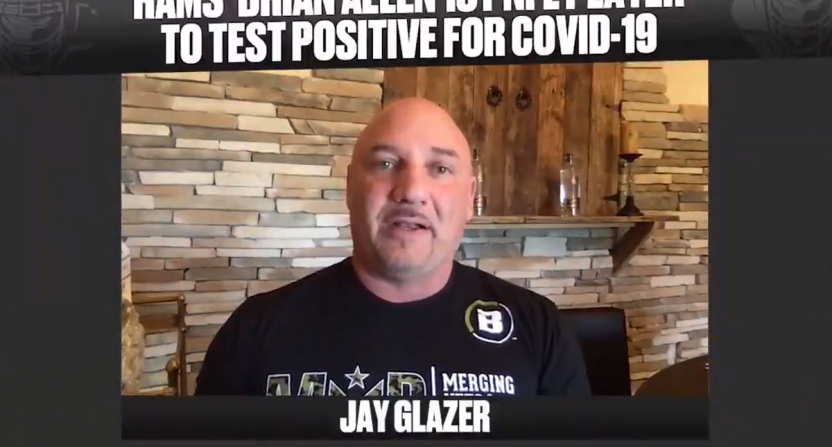 On Tuesday night, Jay Glazer went on Fox Sports Radio and announced that the country should be prepared for a big story he was breaking the next day.

With very little else happening, sports-wise, people latched onto that and immediately began speculating as to what it could be. Glazer seemed a bit surprised by that when he tweeted about it on Wednesday:

The news I have tonight is not transactional news, not a player getting traded or signed. Woke up to seeing y’all going ape-you-know-what guessing what it is. It’s not what you think. Fox Football Now tonight 11 ET/ 8 PT after race

Be careful of the fake sites sending out “breaking news” today gang. Already saw a couple that are being retweeted anddddd… they are full of shit.
Don’t retweet without looking at the handle
Amen!

It was kind of weird, though, for a newsbreaking reporter to not just break the news when he had it. Then, 24 hours later, we got the report:

Glazer pivoted from there into an interview with Rams coach Sean McVay, too:

Los Angeles @RamsNFL Coach Sean McVay talks to @JayGlazer about how the organization responded quickly after discovering one of their players tested positive for Covid-19. pic.twitter.com/jE0efwUnMJ

While that is certainly newsworthy, on its own, the weird 24-hour hype machine Glazer kicked off was never going to be satisfied easily. And considering the news itself, some people found it outright distasteful.

Based on the tease and hype I expected something like “all games will be played in empty stadiums” or “The NFL is buying the XFL” or something. Instead we get “lineman tests positive for COVID and can’t smell anything”. Cool.

Glazer probably didn’t expect the tease to blow up like it did, although that’s a pretty big misread of how desperate a lot of people are for anything sports-related. And he absolutely didn’t try to temper any expectations, either.

Jay Glazer: I HAVE HUGE NEWS THAT WILL THE SHAKE THE SPORTS WORLD IN THE MIDDLE OF A GLOBAL CRISIS

That’s not to downplay the significance of the story!

It’s fascinating that it took this long to learn of an NFL player testing positive, relative to the NBA players who were in-season and therefore in close quarters and coming into contact with many more people in arenas daily, which probably demonstrates the value of social distancing. Other NFL players have almost certainly had Covid-19, of course, but a positive test is a big deal, as is the fact that Allen has recovered.

Had Glazer just tweeted out the news he had on Tuesday night, it would have been a big deal then and it wouldn’t have come with the weird 24-hour setup. He could have used it to promote the interview with McVay, too, which would still have provided some Fox synergy. Of course if Fox Sports had a real website, maybe Glazer just breaks the news traditionally there, and doesn’t have to wait 24 hours to reveal it on a separate Fox property and leaving himself exposed to criticism.