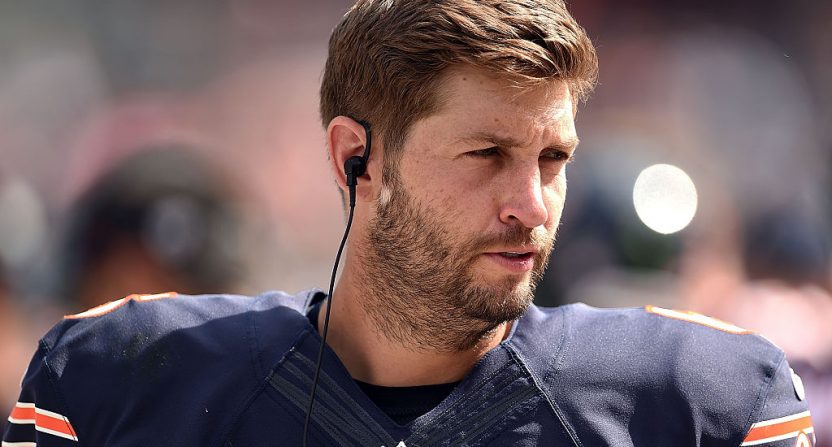 In May, Jay Cutler decided he was done playing football and joined Fox Sports as a game analyst. Now, only three months later, Cutler’s commitment to the network is reportedly wavering, and he could soon end his retirement and sign with the Miami Dolphins.

“He was interested,” Gase said. “I think he’s trying to figure out everything. I mean, you don’t expect this to happen. I don’t think he looked at our situation. He was surprised and he has things to work through.”

Cutler to the Dolphins makes a fair amount of sense. Starting quarterback Ryan Tannehill’s knee injury might keep him out all season, and Miami’s next best in-house option is longtime backup Matt Moore. Gase was Cutler’s offensive coordinator for much of the QB’s time in Chicago, and the two apparently have a good relationship.

But while joining the Dolphins could appeal to Cutler in the short term, he risks damaging his broadcasting prospects long-term. Fox handed Cutler an analyst position on the network’s No. 2 broadcast team, despite his lack of TV experience, and there’s certainly no guarantee he’d find a comparable job down the road. These gigs don’t open up too often, and there are typically many analysts vying for them when they do. Cutler lucked into a very cushy situation and if he gives it up now, he might never get it back.

Cutler ditching his analyst job just as the season approaches would also be sure to bug the execs at Fox, who would have to scramble to replace him. The network has been operating all offseason on the assumption Cutler is aboard, shaping their broadcaster lineup accordingly. If Cutler bails at the last minute, Fox still has Charles Davis alongside Kevin Burkhardt, but they’ll have to scrap the plans for a three-man booth they’ve nurtured all summer, just as the preseason is starting. The bosses there would be entitled to hold a grudge against Cutler, which could harm his prospects of getting another shot there in the future.

You have to imagine that by this point both Fox and the Dolphins just want Cutler to make a decision so they can move forward one way or the other. If the team needs a quarterback, it’s going to want to get on that. And if the network needs an analyst, it’s running out of time.