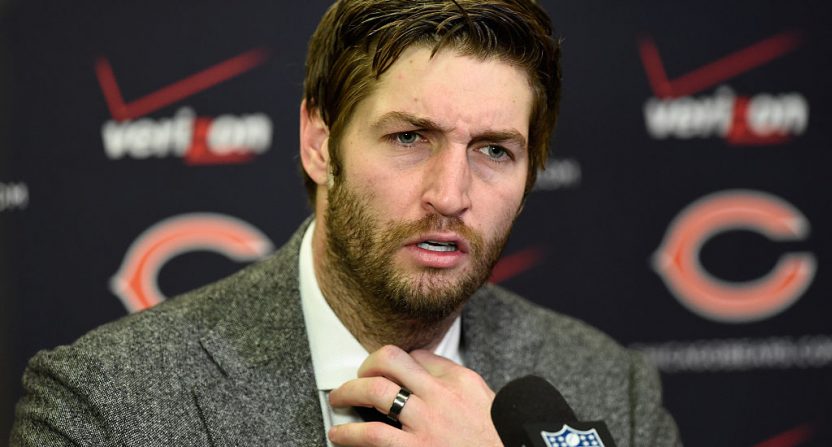 Fox’s No. 2 NFL broadcast team is going to look different than expected this season, as the long-running rumors that newly-signed analyst Jay Cutler would leave them to join the Miami Dolphins came true Sunday. NFL Network’s Ian Rapoport and ESPN’s Adam Schefter have the details:

He's back: QB Jay Cutler is coming back. Sources say he's agreed to sign with the #Dolphins.

Miami's one-year deal with QB Jay Cutler is worth $10 million, plus incentives, per source.

Cutler only joined Fox in May after the Chicago Bears released him in March, and after he didn’t find another job that fit with what he was looking for. However, the opportunity with the Dolphins was an interesting one that only became open this week thanks to presumed starter Ryan Tannehill going down with a non-contact knee injury, which will cause him to miss at least six to eight weeks and perhaps undergo season-ending surgery. And Tannehill’s position wasn’t all that solid before the injury; yes, he helped Miami to a 10-6 record and a playoff berth last year, but his overall play with the Dolphins has created some questions, and they could opt to part ways with him this next offseason and pay just $4.6 million. So even if he does return midseason, the team’s not necessarily automatically benching Cutler for him, especially if Cutler is playing well and the team’s winning.

It also helps that Cutler has a preexisting relationship with Dolphins’ head coach Adam Gase, who was the Bears’ offensive coordinator in 2015. That was one of Cutler’s better seasons; he threw for 3,659 yards while averaging 7.6 yards per attempt, completing 64.6 per cent of his passes and tossing 21 touchdowns against 11 interceptions. It’s not the best Cutler has ever done (his 2014 season was even better with 3,812 yards, 6.8 per attempt, a 66.0 per cent completion rate and 28 touchdowns against 18 interceptions), but it’s up there, and much better than his injury-plagued 2016. He also seemed to get along with Gase pretty well, and Gase seems to have kept pressing Cutler to come join him, which Rapoport said was a key factor here:

#Dolphins coach Adam Gase has been persistent. It's working. Sources say Jay Cutler is leaning toward coming out of retirement for #Dolphins

This leaves a host of questions for Fox, though. Having their highly-anticipated new analyst leave just before the season creates a bunch of problems. Cutler was going to be part of a three-man booth on the #2 team with Kevin Burkhardt and Charles Davis, so it’s possible that team could be just Burkhardt and Davis. However, this could also lead to them rearranging the pairings or sliding others up. Other Fox analysts include Ronde Barber (expected to be with Kenny Albert), Daryl “Moose” Johnston (with Chris Myers), and new hire and former ESPNer Mark Schlereth (expected to be with Dick Stockton). With this coming so close to the start of the season, it creates quite the problem for Fox, and certainly alters their plans.

That raises the question of if Cutler will be welcomed back into the broadcast booth after this playing stint. We don’t know how his Fox bosses will react to this, or how he informed them that he was still interested in playing, but it certainly doesn’t seem like something that would boost his standing at the company. And considering that there were already plenty of people questioning Cutler’s ability as an analyst, including an anonymous NFL executive Michael McCarthy of The Sporting News quoted back in May, this move may boost his perceived negatives further. It’s possible that his broadcasting career could be over without calling a game, and if so, returning to the NFL could be a poor long-term decision for Cutler. (However, he will be making substantially more money this year, and there certainly could be other opportunities for him in different fields.) It’s also possible that he’ll do well, play for a couple of years and then still find broadcasters wanting to hire him, though. In any case, his tenure may have not been the worst…