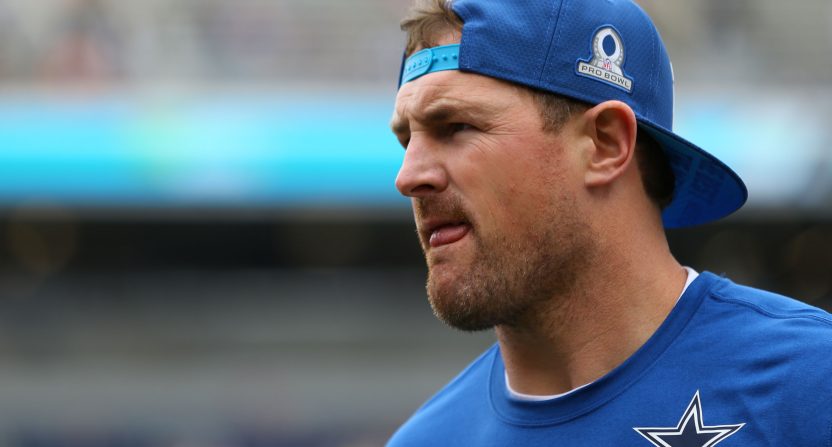 Well, Witten seems to have made up his mind. On Thursday morning, ESPN’s Todd Archer, the New York Post’s Andrew Marchand and others reported that Witten would indeed be joining play-by-play man Joe Tessitore on Monday Night Football, ending a months-long search for Jon Gruden’s replacement.

Breaking: Jason Witten is retiring from the Cowboys and joining ESPN as an analyst for Monday Night Football, multiple sources tell @toddarcher. pic.twitter.com/JnPvCrvzNW

Witten’s decision to accept the MNF job, for a reported salary of more than $4 million, ends a playing career that saw him catch 1,152 passes for 12,448 yards and 68 touchdowns and earn 11 Pro Bowl berths. He retires on the heels of a 2017 season in which he nabbed 63 passes for 560 yards and five scores.

Witten was not ESPN’s first choice for the Monday Night Football position (That was Peyton Manning), but he seems to have risen above a field of candidates that was full of experienced broadcasters (Matt Hasselbeck, Kurt Warner, Louis Riddick, Booger McFarland, Rex Ryan) and compelling current and former players who, like Witten, lack analyst experience (Joe Thomas, Greg Olsen, Brett Favre).

After Witten’s press conference on Thursday, ESPN made it official and welcomed him to Monday Night Football.

Congratulations @JasonWitten and welcome to ESPN. A comment from @ConnorSchell on the #Cowboys legend and newest addition to our #MNF team. https://t.co/qmFtgz4SDt pic.twitter.com/GU6mOWVNyx

Now that Witten is aboard, ESPN must figure out, if it hasn’t already, whether to use Witten as the lone analyst or pair him with a more experienced broadcaster. We have mused previously that Riddick could make sense in that role and have heard whispers that McFarland could be a fit as well. McFarland has emerged as somewhat of a rising star at ESPN, jumping from SEC Network to ESPN’s main college football team in 2017, while also appearing on numerous weekday shows including Mike and Mike to Get Up.

With Witten joining ESPN — and Tony Romo and Troy Aikman already planted at CBS and Fox, respectively — three of the four NFL rightholders now feature a former Cowboy as the analyst on their lead broadcast team. The lone exception is NBC, who has Cris Collinsworth and he spent his career with the Cincinnati Bengals.