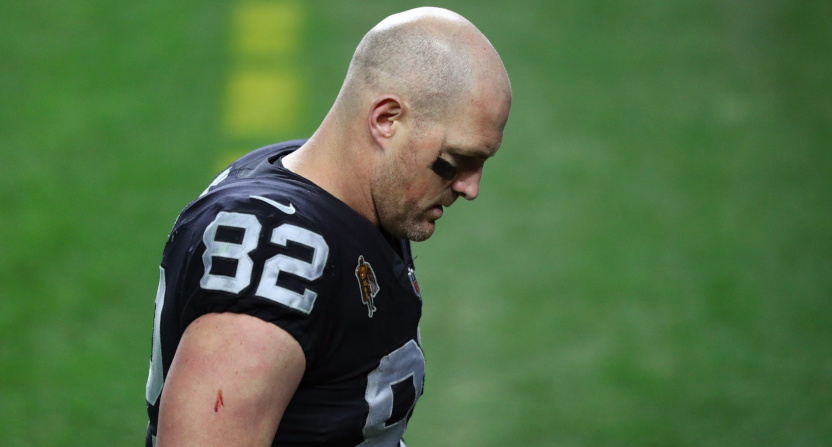 One of the odder broadcasting stories in the past few years saw Jason Witten leave ESPN’s Monday Night Football booth after just a single year in February 2019, doing so to return to the Dallas Cowboys as a player. In 2019, he started all 16 games for the Cowboys and posted 63 catches for 529 yards and four touchdowns. Witten then joined the Las Vegas Raiders this past offseason and took part in all 16 games for them (he’s seen above during a December game against the Miami Dolphins), but only started seven, and only made 13 catches for 69 yards and two touchdowns. As per ESPN’s Todd Archer, Witten (who will be 39 in May) is now retiring again:

Jason Witten has told ESPN he is retiring from the NFL after a 17-year career. He intends to sign one-day contract and retire as a member of the Dallas Cowboys in March when his contract with the Las Vegas Raiders expires in March. He finishes his career with 1,228 catches, 13,046 yards, 74 touchdowns and 271 games played, which are the most in NFL history by a tight end.

So, could Witten return to the broadcast booth? Well, his stint on MNF took a lot of criticism. But after he made the move back to the NFL, he told Dan Patrick he wasn’t too bothered by the backlash, and he would have returned to playing even if his commentary had been better-received:

“I think I would be playing, still. And that’s not a knock at that, I just felt like there was a strong desire and fire that I still had to go play. Did I make the right decision, the wrong decision? If I didn’t have the opportunity to play again you could say it was wrong. But I’m better not only as a player but as a person through that experience. You go through some adversity, you get humbled, and you survive that year. I’m grateful of that.”

…”I don’t know that you’re ever more alive then when you’re playing the game that you love, if you feel like you can play it to the level you expect to play. It was always kind of pulling on me. We were fortunate enough to call the Chiefs-Rams game that was supposed to be in Mexico City last year, both teams were undefeated, star players galore, young coach vs. the old coach. And it was a shootout, it was the highest-scoring game of the season. And you finish the game, and I didn’t play in the game, I didn’t help the team win. We didn’t screw up the broadcast too bad.”

“I wanted that feeling, I wanted to be a part of a team, I wanted to go out and play and experience where winning and losing matters…I’m appreciative having this opportunity again, and I have a lot of joy knowing I can still play. So, yeah, I think I would have gone back and played, for sure.”

And he told Ryen Russillo the criticism didn’t really bug him much:

“I’d check my texts and I’d found out I was sick, or somebody died in my family. ‘Hey, praying for you’, ‘Keep your head up!’ I’m like my gosh, it wasn’t that bad! I said ‘pull a rabbit out of his head’ instead of ‘rabbit out of his hat’! You guys knew what I meant, right? I screwed up, but it wasn’t the end of the world in my opinion.”

So, from Witten’s public comments at least, the return to the NFL wasn’t about getting out of broadcasting, but about getting to play again. And if he was fine with the criticism he took for his past mistakes, he might be willing to subject himself to more if he did head back to broadcasting. And it’s quite likely he would be put in a better situation as either a studio analyst or an analyst for regional games to start, rather than getting his first game analyst work in as part of an entirely-new booth in nationally-televised primetime games. (It should be emphasized that a big part of that MNF booth’s issues weren’t necessarily about Witten, Joe Tessitore or Booger McFarland, but rather about the incredibly-difficult situation they were put in; having two people make their NFL game analyst debut on MNF would be tough enough in the first place, and ESPN made it much worse with the 2.5 man booth thanks to the “Boogermobile.”)

However, it’s worth asking if Witten’s actually well-regarded enough by anyone in the broadcast world to get another shot at NFL TV commentary (if he did in fact decide to pursue that). Despite his on-field accomplishments, he wasn’t necessarily an obvious hire even in the first place, and hiring him now would seem to come with some potential blowback given his MNF struggles. And ESPN, the place that employs the most NFL studio analysts, might also not be so eager to bring him in given how he left them mid-contract to return to the NFL (and did so late in the offseason, creating booth challenges for them, and did so after they’d spent a lot of the offseason promoting him). It’s certainly possible that Witten might get another kick at the broadcasting can if he wants (and it’s not clear yet that he does want that), but it’s not a sure thing. So we’ll see what, if anything, Witten’s second retirement means for the broadcasting world.