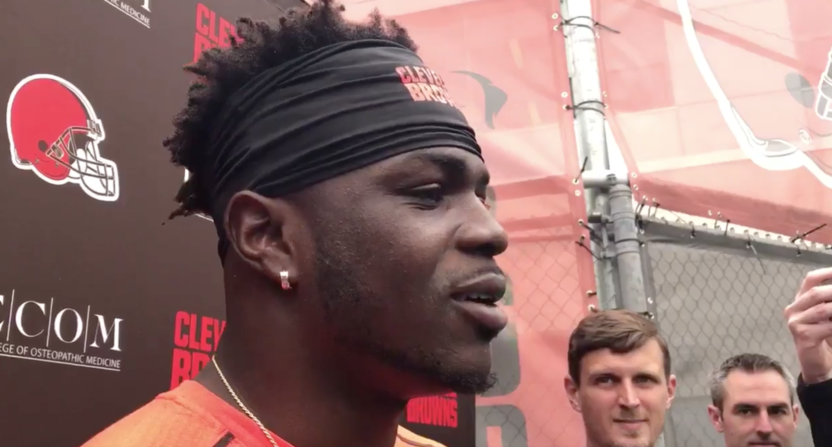 On Wednesday, ESPN 850 Cleveland contributor Sabrina Parr made a series alarming accusation against recent Browns draftee Jabrill Peppers, saying the first-round pick was “on the lean and the molly” and “high all the time.”

Well Peppers, to no one’s surprise, denied Parr’s allegations. He seemed almost at a loss for words as he answered a reporter’s question on the subject.

“Absolutely not,” Peppers said. “Never in my life. So I’m not even gonna get into that because—no. I’m not going to get into that. But no. Whatever drugs she said I’ve done, I’ve never done in my life.”

#Browns Jabrill Peppers: I've never done any of those drugs that (the former espn cleveland reporter) said I did pic.twitter.com/WScW7KHxj9

In a way, Peppers shouldn’t even be required to deny unsourced allegations from a radio host with a notorious history on and off the radio. In fact, Parr had basically recanted her comments—claimed she was misquoted (on her own radio show) and deleted all tweets mentioning Peppers—by the time Peppers was asked about them.

Hours later, she was fired from ESPN 850 Cleveland.

Peppers came into the NFL under a cloud of suspicion after his urine sample at the combine was too diluted to test but was nonetheless drafted No. 25 overall by the Browns. Given that background, Parr likely felt she had some cover to accuse him of abusing drugs, which was obviously quite unfair.

Hopefully Peppers can move forward with his NFL career and everyone can stopping fussing about what drugs he does or doesn’t do.