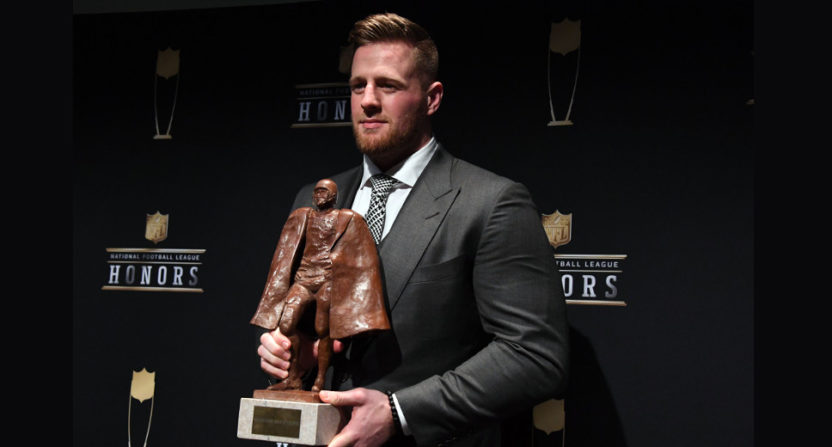 Former NFL executive and current media figure (most notably with The Ringer) Michael Lombardi has dropped some hot and wrong takes over the years, and it looks like he’s at it again. On an episode of The Ringer NFL Show podcast released Monday night, Lombardi had quite the take on UCLA quarterback and NFL draft prospect Josh Rosen, who Lombardi said “might like humanitarian work more than football.”

That take got criticized by The Nation sports editor Dave Zirin Wednesday and then lit up by Houston Texans’ defensive end J.J. Watt (who, it should be noted, has found great success as both a humanitarian and a football player, and is seen above after winning the Walter Payton Man of the Year award this year).

But this spiraled into a whole media controversy, thanks to how it unfolded. First, Zirin tweeted it one way, and Watt retweeted it with an analogy to Laura Ingraham’s “Shut up and dribble” comments about LeBron James and Kevin Durant. Zirin has since deleted that tweet and tweeted again with the actual phrasing Lombardi used:

This is just as dumb as the “shut up and dribble” comment. Right or wrong, athletes are some of the most recognizable people in this country. That is an extremely powerful platform that so many use to do great things in their community. Who wouldn’t want that? #MoreThanAnAthlete https://t.co/wDKcj341n8

With apologies to @mlombardiNFL the exact quote was that Rosen "might like humanitarian work more than football…. I don't know where his values lie."

I deleted the original because if you're going to use quote marks, you need to get it right. Again, apologies. Will do better.

Ringer CEO Bill Simmons then got mad about this, as did The Ringer’s head of social media, Pat Muldowney:

Not nearly a good enough “correction” / you made the first quote up and this “paraphrased” second version of it does not represent the context of what he said either. Do better. 12:40 mark – https://t.co/umiSx1Wk5q https://t.co/QLLP4CWsdB

It's incredible how much damage one person in the industry can do do someone else's reputation by misquoting them and creating a fake outrage cycle. Even when they delete the tweet after two hours, the damage is done.

And the MMQB’s Albert Breer chimed in to blast Zirin:

This is zero surprise coming from that guy.

While Zirin defended his interpretation:

Folks can and should listen for themselves. The bifurcation between choosing between football and being a humanitarian is clear. https://t.co/0lBvwj3Ser

Here are Lombardi’s full comments on Rosen, starting around the 12:30 mark after Frazier asks about the “teams worried about his makeup” and if Rosen “helped himself this weekend”:

“I don’t know if he did. To me, what I’m hearing is that it was okay, I think he’s going to have to prove it. You know, he’s coming back, saying he loves football, I’ve talked to some people, he might like humanitarian work more than football, I don’t know. Nothing wrong with that, but I don’t know where his values really lie.

Lombardi then went on to talk about Louisville quarterback Lamar Jackson.

“I think this is a really hard quarterback class. And then you’ve got Lamar Jackson, who doesn’t even have an agent, which is completely bizarre, right? Doesn’t have an agent, went out there, interviewed, people talk to him, can he run the whole volume of the offence, does he know what he’s doing, and then he came out and he didn’t throw the football particularly well, didn’t run a 40, so he’s got to bounce back and do some things. I think there’s a lot more work to do on these quarterbacks.”

So Lombardi’s actual phrasing is perhaps a bit better than the phrasing Zirin tweeted and Watt lit up, but the base point is still the same, with Lombardi questioning if Rosen “likes football” more than humanitarian work. And that speaks to the bizarre idea that athletes can only care about their sport, because that’s totally what other people do with their jobs, right?

This is perhaps particularly strong in the NFL, which seems to try to discourage personality and individuality at many junctures along the way. And Lombardi’s quote here is the latest example of that, and Watt’s right to criticize that take. Even if Lombardi didn’t quite say it the way Zirin said he did.